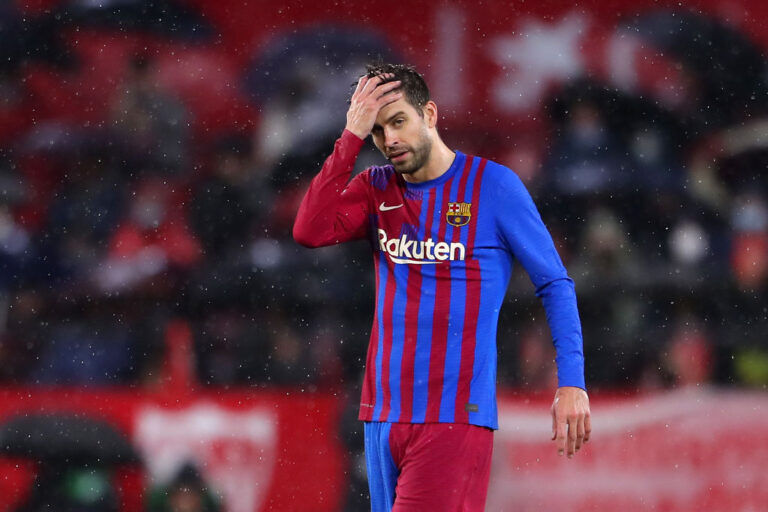 Gerard Pique has found out that he is surplus to requirements at Barcelona, with manager Xavi telling him that he can leave.

This surprising revelation comes after a challenging couple of years for the Spanish defender. During the pandemic, Pique was widely lauded for honourably taking a pay cut to ease Barcelona’s finances. However, it turned out that he restructured his contract, so he received his wage in instalments over a more extended period.

Pique openly talked about taking a wage cut – which it looked like on the face of it. But, he failed to speak about the instalments. Unsurprisingly, fans and fellow players were left furious when news of this broke out. They even branded Pique a ‘traitor’ as a result.

Unfortunately, the 2010 World Cup winner just cannot seem to stay away from controversy. In April 2022, news broke that labelled Pique as the subject of numerous allegations. The Barca player’s company, Kosmos, reportedly helped the Spanish FA reach an agreement with Saudi authorities to host the Supercopa Espana in the Gulf Kingdom.

From this, Pique’s company earned a hefty commission. According to El Confidencial, the defender pocketed himself €6 million per year for the next four years, too.

The defender went on to deny any wrongdoing.

This off-field distraction has led Barcelona boss Xavi to tell Gerard Pique that he no longer fits into his plans.

Spanish outlet SPORT report that Xavi had other concerns besides the business interests distracting Pique. The manager is worried that the 35-year-old may be unable to keep up with the demands of a busy season.

Despite this, Xavi reportedly still has complete faith in Pique’s technical ability – just not his body’s capability to play so many matches.

His manager may have a point. Last season, Pique missed 12 matches due to injury. Most recently, his torn abductor muscle sidelined the Spaniard for the whole of May.

But Pique still proved that he could play a large proportion of matches. In 2021/22, the Spaniard made 39 appearances in all competitions, with 35 of those being starts.

He is not ready to give up either; the Daily Mail claim that the defender is resisting the club’s stance. He wants to work hard to prove his worth and is willing to reduce his off-pitch workload from other ventures.

Unfortunately, Xavi’s decision may signal the end of Pique’s 14-year stay at Camp Nou. So, who are the Catalan giants aiming to replace him with?

During this rebuild under Xavi, Barca have turned to more youthful options in their defence. Therefore, they already have some in-house replacements for Gerard Pique. For instance, players such as Ronald Araujo and Eric Garcia are regular selections. Additionally, Oscar Mingueza has made some appearances too.

However, this may not stop them from dipping into the transfer market. One already confirmed deal is for Andreas Christensen. The Dane left Chelsea on the expiry of his contract and joined Barca as a free agent. He adds another centre-back option for Xavi.

Interestingly, AS say that Sevilla’s Jules Kounde is a top target for the Catalan giants. AS claim that Barca bid €20 million, plus Clement Lenglet and Sergino Dest, for the French defender.

Unfortunately, this may be a difficult transfer to pull off; ESPN say that Kounde could sell for up to €60 million, pricing Barcelona out of a move.

Any player arriving will have big boots to fill at centre-back. Despite all the controversy, with 602 appearances to his name, Gerard Pique is a Barcelona legend.