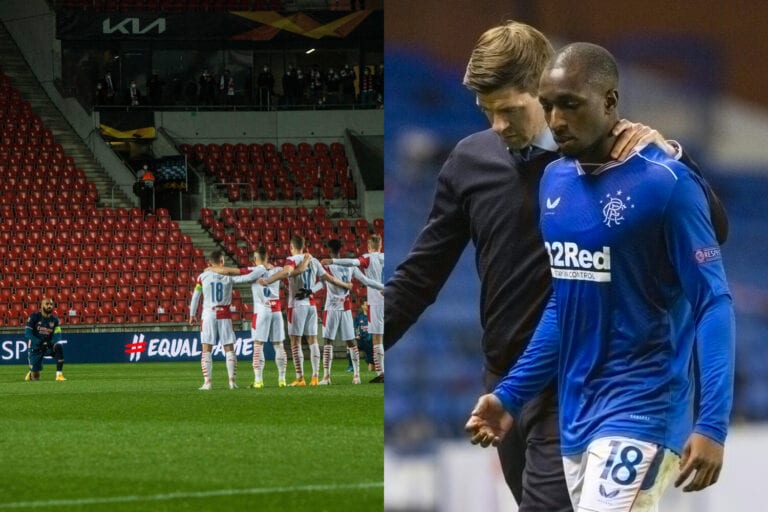 Rangers manager Steven Gerrard has said he admired Arsenal‘s approach “before, during and after” their 4-0 win over Slavia Prague in the Europa League last night.

Gerrard’s side were knocked out by Slavia in the last-16 round of the competition, after a 2-0 defeat at Ibrox in the second leg.

Slavia Prague defender Ondrej Kudela was banned for 10 matches earlier this week by UEFA for “racist behaviour” towards Rangers midfielder Glen Kamara during the game in question.

Before the second leg of their quarter-final clash with the Czech opposition, Arsenal captain Alexandre Lacazette took the knee in front of the entire Slavia team, with his team-mates doing the same behind him.

The Gunners then dominated the tie, scoring three goals inside half an hour to effectively end the match as a contest.

Lacazette, Nicolas Pepe and Bukayo Saka all got their names on the scoresheet, with Lacazette adding a fourth and final goal in the second half to seal Arsenal’s progression to the semi-finals.

And Gerrard has since credited Arsenal, both for their display and for what they did either side of the match.

Speaking on Friday morning, he said: “I loved everything about the game.

“I loved the Arsenal performance, the way they went about it.

“I admired how they approached before the game, during the game and after the game. I’m sure Glen did as well.

“Everything about it, the way they prepared for the game, the way the manager spoke, the way the players behaved before, during and after, and then to back up with that level of performance, I sat there and really enjoyed that performance.

“I thought it was sensational.”

Arsenal boss Mikel Arteta said he thought taking the knee in front of the Slavia players was a “good gesture”.

He said: “They [players] asked me and the club that they wanted to take that initiative.

“They had the right reasons for it, so the club was very supportive.

“I was supportive and thankfully the referee and UEFA, they’ve been supportive. So I think it was a good gesture.”

Arsenal will face Villarreal in the Europa League semi-finals after the Spanish side defeated Dinamo Zagreb on aggregate.

The tie will see Arteta come up against the man he replaced in the Gunners dugout, with Unai Emery now in charge at Villarreal.

The two teams faced off in a Champions League semi-final tie 15 years ago. Arsenal won the tie 1-0 on aggregate, but would lose in the final to Barcelona.