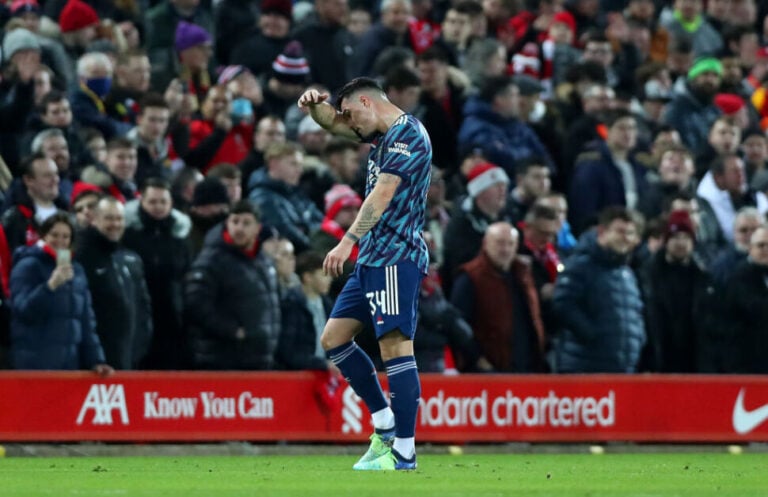 If you thought that Granit Xhaka would be concerned with how many red cards he accumulates, this video might make you think otherwise.

His most recent red certainly made the Carabao Cup semi-final first leg hard work. With Thomas Partey’s dismissal in the second leg, Arsenal’s red card problem cost them the opportunity of a Wembley appearance.

The Gunners have had three red cards in their first four games of 2022. It calls into question Arteta’s ability to keep his players disciplined.

Now, there are hints of an attitude problem in a new video.

Talking to BeIn Sports, Xhaka started by thanking his team for their hard work in keeping the first leg at 0-0.

“I say thank you to the team, of course,” he said. Before following up with: “Maybe [this is] for the first time after I get the red card, they didn’t smash us.”

The Arsenal midfielder followed this comment with a small laugh and a wry smile.

Xhaka has made such costly errors numerous times in his Arsenal career. In this instance, he could have cost them the chance of a Cup Final.

Making light of the error might upset the Arsenal faithful. It suggests he isn’t too bothered about letting them down.

Commenting to Reddit, some fans saw the dark humour of Xhaka costing them games with his red cards. The way he casually acknowledged the cause and effect. One posted: ‘He’s so used to getting sent off and opponents smashing us.’

However, others didn’t see the funny side of his comments. They suggested that Xhaka was hindering the team’s success with his actions. Some fans are truly fed up, wondering how their peers are okay with him ruining games for them repeatedly.

Granit Xhaka has had a mixed relationship with Arsenal fans since he arrived in 2016. The bond seemed irreparable in 2019 after fans booed the midfielder when he was substituted off. Xhaka reacted angrily to the fans booing him, taking off his shirt and going straight down the tunnel.

He was stripped of the captaincy by then-manager Unai Emery following the incident.

However, Xhaka persevered at Arsenal under Mikel Arteta and has worked his way into being a regular in the starting XI. Despite this, his lack of discipline still plagues his game. Laughing at his latest dismissal will add another layer to the complex relationship between himself and the fans.