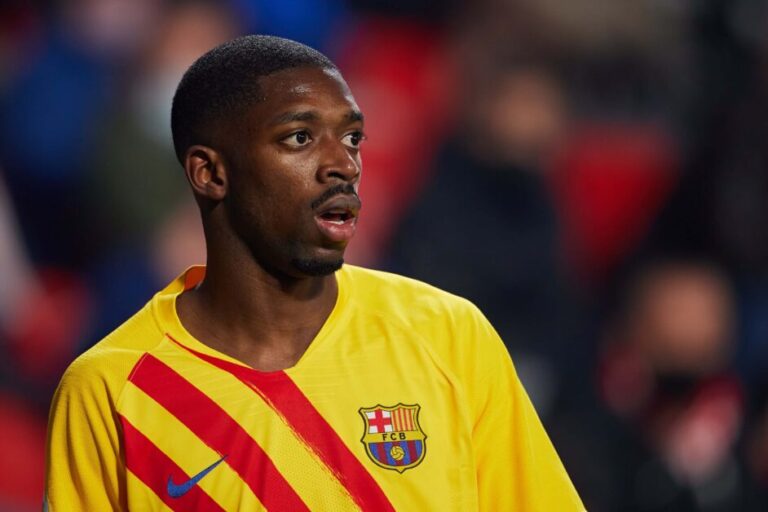 Ousmane Dembele’s time at Barcelona appears to be coming to a very swift and ugly end.

The Spanish giants have been attempting to renew the Frenchman’s contract, which expires this summer, for months.

Barca’s primary motivation, it appears, has been to convince Dembele and his agent to lower their wage demands. That would allow the club to become a greater power in the transfer market and register more players.

But neither Ousmane Dembele nor his agent has backed down and settled for the demands of Barcelona. Several factors, including the signing of Ferran Torres and the club’s pursuit of Erling Haaland, has failed to convince the Frenchman that Barcelona are intent on giving him what he believes he is worth.

As a result, Barca have been slowly pushing the 24-year-old to the fringes of their squad. On Thursday, he was not part of the squad that travelled to play in their Copa del Rey tie against Athletic Bilbao.

Then it was announced by Barca director Manu Alemany that the club would attempt to sell the player.

He said: “It’s clear that Dembele does not want to continue with Barcelona. He doesn’t want to be part of our project. We told Dembele he has to leave immediately. We expect Ousmane to be sold before Jan 31.”

Dembele then hit back with a statement of his own. He stated he would not give in to any form of “blackmail” and said people had “shamefully lied”.

How could Barcelona sell Dembele?

There are numerous ways that Barcelona could create a situation whereby Ousmane Dembele leaves the club.

The first – and most obvious – way is to sell the Frenchman to an interested buyer. Furthermore, the 24-year-old will be an attractive proposition for Europe’s top clubs at a presumed reduced valuation, putting aside his injury record.

The Daily Mirror has reported that Newcastle United have already offered Dembele a big contract. In addition, Chelsea, Manchester United and Liverpool have all been linked in recent days.

Another is to push the Frenchman out of the first-team setup entirely, thus encouraging him to seek a move away from the club. However, players’ union AFE has stated that such treatment of the player, because of his refusal to sign a new contract, could be classed as “illegal”.

Furthermore, as a third option, Barca could keep Dembele until the end of the season before allowing him to leave on a free transfer. But with the club wanting to free up the player’s wages, that option seems unlikely.

The payment that could delay Dembele sale

However, selling Dembele quickly may be easier said than done.

That is because, according to German outlet Sport1 (as per AS), Barca agreed to a fixed fee payment to previous club Borussia Dortmund if they sold Dembele before the end of his contract. That payment stands at €5 million.

It is unclear whether Barcelona will pay the reported fee. Given that the club’s president, Joan Laporta, secured a €525m Goldman Sachs loan last summer, the club are in a much stronger position to negotiate transfers.

But the Spanish giants were delayed in their attempts to sign Ferran Torres due to a payment owed to Manchester City for the signing of Denis Suarez in 2013. According to journalist Lou Martin, there was still an outstanding payment of around €1.5 million owed to City. It has not been confirmed as to whether the club completed the transaction.

The decision for Barcelona now stands around whether they are willing to pay the reported €5 million or whether the financial offset is worth it to get the player off the books. With Ansu Fati now on the treatment table again, Barca have a big call to make.