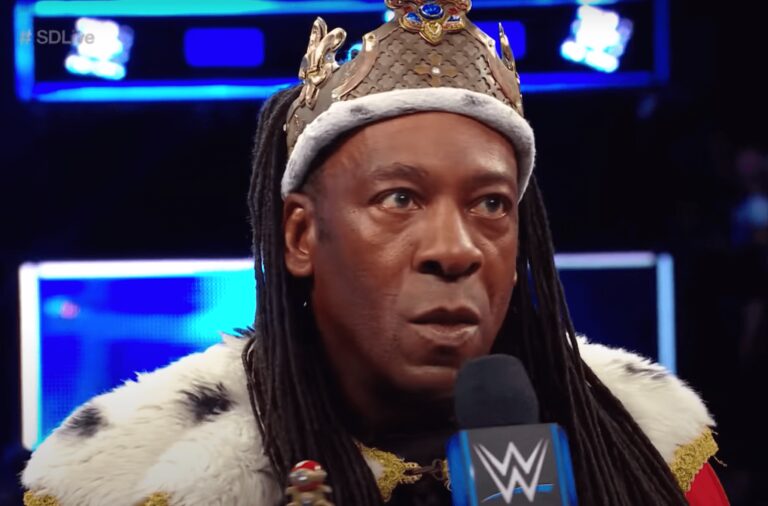 Adam Page has slammed Booker T in a savage rant after the WWE Hall of Famer commented on Adam Cole’s weight.

In retirement, the six-time world champion has continued to utilise his gift of the gab by co-hosting a podcast entitled ‘The Hall of Fame with Booker T & Brad Gilmore’. And unsurprisingly, he’s willing to give his unfiltered opinions.

But his words landed him in hot water during a recent edition of the show. And consequently, he’s ended up in a war of words he’d rather not have been in.

While discussing why Cole sustains injuries, he said: “We gotta get more weight on Adam Cole.”

These comments left fellow wrestler Adam Page furious, and after struggling to contain his anger, he took to Twitter to respond.

The AEW star ranted: “I just hope that when I’m old and retired, I don’t lower myself to some s**t-ass podcast where I trash the younger generation that’s just chasing the same fortune wrestling has afforded me.”

His angry words left Booker T dumbfounded, and he has since claimed that he meant no offence.

On the latest edition of the podcast, the 57-year-old addressed the controversy and claimed that the internet had twisted his words.

“As opposed to trying to advocate how we could make Adam Cole look better, I think I would be saying a whole lot worse if I was trying to down Adam Cole.

“That’s what the internet does, man. They take anything that I say and try to make it clickbait like I criticised Adam Cole.”