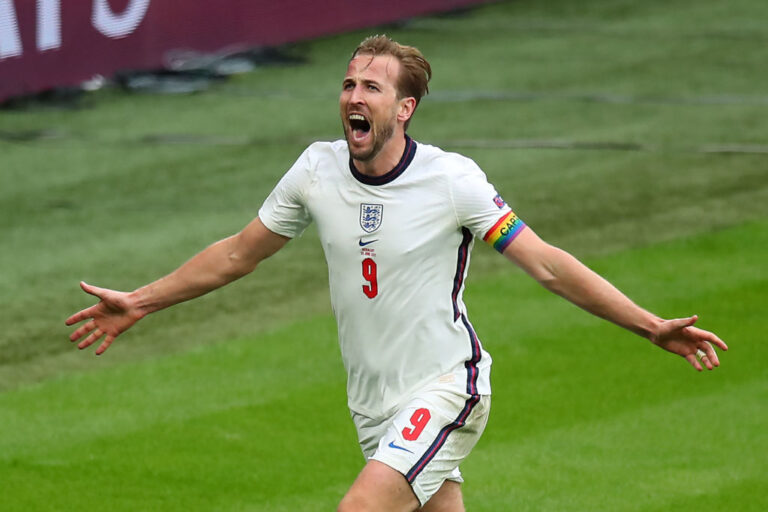 Harry Kane is one of the best penalty takers in world football – but what is his penalty record for England?

Kane is the go-to spot-kick taker for Gareth Southgate. In addition, the Tottenham striker has pinpoint accuracy from the spot, and rarely misses from 12 yards.

The 29-year-old is one of England’s all-time leading goalscorers, and it will undoubtedly not be too long before he takes the mantle outright.

A total of 16 of his goals in an England shirt came in the 2021 calendar year. At Euro 2020, he netted four goals as Southgate’s side reached the final.

After the tournament concluded, Kane smashed in seven goals in just four days. He began with a hat-trick against Albania, before netting four goals against San Marino.

But how many of his England goals have come from the penalty spot – and how many penalties has he missed?

Harry Kane penalty record: How many penalties has he scored?

He is the all-time leading penalty scorer for England. In second on the list is Frank Lampard, with nine. Kane broke the record in March 2021, after he netted from the spot against Poland at Wembley. The goal sealed qualification for the 2022 World Cup in Qatar.

How many penalties has Harry Kane missed for England?

As per Transfermarkt, Harry Kane has missed three penalties in an England shirt. Therefore, he has scored 14 out of 17 spot kicks for his country – an impressive conversion rate of 82.35%.

His first penalty miss for England came in May 2016. On that occasion, Kane saw his effort from 12 yards kept out by Volkan Babacan during a 2-1 victory over Turkey.

His second miss came in a Euro 2020 qualifier against Kosovo in September 2019. The Tottenham striker was stopped by Manchester City goalkeeper Arijanet Muric on that occasion. England won the game 5-3.

Meanwhile, Kane’s third and most recent miss occurred at Euro 2020, in England’s semi-final against Denmark. Kasper Schmeichel kept out his penalty kick. However, Kane immediately slotted home on the rebound, and England won the game – so we can forgive the Spurs star for missing that one.