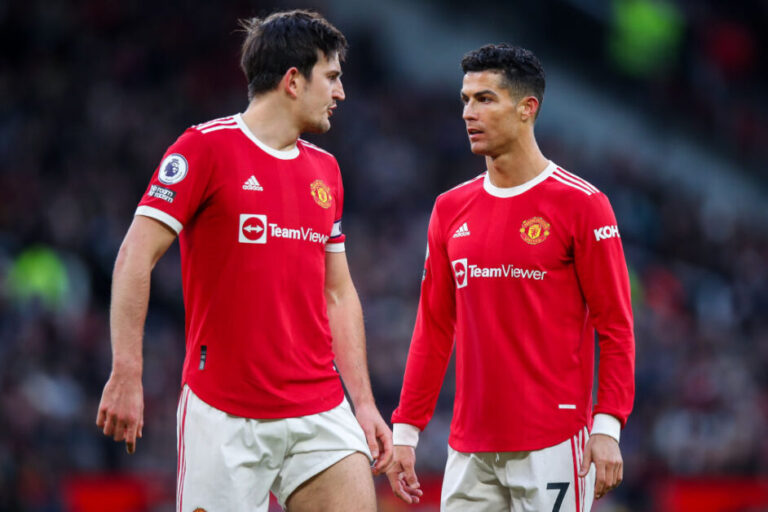 Man United captain Harry Maguire has denied reports that he may lose the armband, with Cristiano Ronaldo in the running as his replacement.

This comes off the back of reports of dressing room unrest in the United camp, a problem that has affected their on-pitch performances.

The Old Trafford side has just one win in their last four games in all competitions. Disappointingly, they drew with bottom-of-the-Premier-League Burnley and Southampton, dropping points in the race for the top four.

Speaking on Sky Sports, Neville went on a passionate rant, labelling the leaks “disgusting” and “disrespectful.”

Despite a 2-0 win over Brighton in midweek, reports continue to emerge from the United camp suggesting discontent in their squad.

Power struggle for the captaincy

Reports from The Mirror suggest that Harry Maguire faces a struggle to retain the captaincy. Manager Ralf Rangnick reportedly asked Ronaldo to step up and mentor some of the younger players – a move that may undermine Maguire.

The current Man United captain has also been struggling for form. Rangnick may view a temporary change of captaincy as a way of easing some pressure off of Maguire so that he can focus on just himself.

However, Maguire is said to think that any change of captaincy, especially to someone as influential as Cristiano Ronaldo, would be a permanent move.

Ronaldo has positioned himself as a leader in the dressing room, which may prompt change. Ralf Rangnick has a big decision to make.

Despite the reports, the Man United captain took to Twitter to rubbish suggestions of a power struggle. He wrote: “I’ve seen a lot of reports about this club that aren’t true, and this is another.”

“Not going to start posting about everything that is written but needed to make this one clear. We’re United and focused on Sunday.”

Maguire has an apparent belief that his position as club captain is safe. However, the rumours from the rest of the United camp suggest a change is possible.

Cristiano Ronaldo has plenty of experience in a captain’s role. He has been his national team’s captain since 2008 and has led Portugal through the most successful period in their history. He is also a prominent mentor for younger players, important with a Man United squad full of youthful talent.

Despite this, Rangnick may still be hesitant to select Ronaldo as Man United captain. His passion makes him a great leader, but only when channelled correctly. The Portuguese icon is prone to frustrated outbursts, for example, ripping off and kicking away his armband following Portugal’s elimination from Euro 2020.

He may also leave Man United at the end of this season, reportedly unhappy with how his second stint at the club has gone. Another reason to not give Ronaldo the armband.

The best choice for Rangnick?

Another reason Rangnick may not give Ronaldo the Man United captaincy is because of their relationship. The manager and star striker have not seen eye-to-eye often this season.

A notable incident involved Ronaldo reacting angrily to being subbed off at Brentford. This particular move forced Rangnick to explain his actions to the Portuguese international.

Fresh news suggests that Rangnick and Ronaldo may have fallen out again. Rangnick called out all his attackers, stating that he felt they should finish off more chances. However, the German name-checked Ronaldo in his message.

He was quoted by the Mirror saying: “It’s not just about Cristiano Ronaldo. He should score more goals,” he said. “But it’s not just Ronaldo’s problem, it’s all attacking players.”

By singling out Ronaldo, Rangnick has apparently made his player very angry and damaged their relationship beyond repair.

This development would be bad news for Rangnick. Ronaldo is a hero at the club, with significant influence. If Rangnick decides to make him captain as reparations, he might make Cristiano Ronaldo impossible to drop.