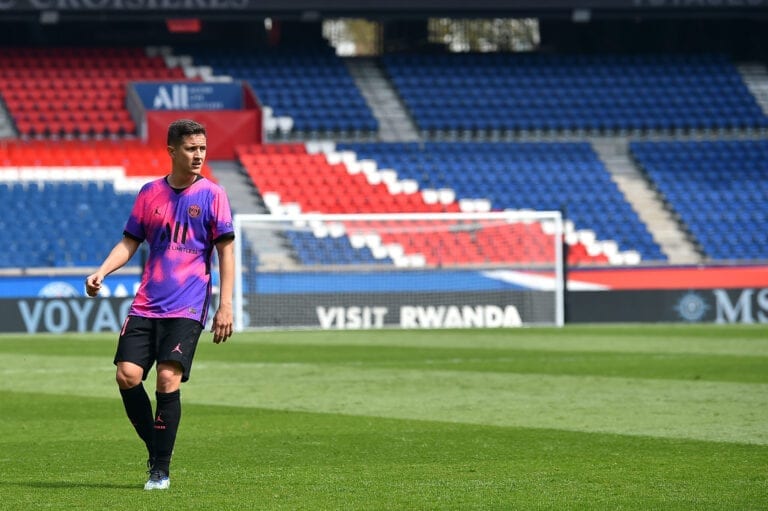 Ander Herrera has become one of the first major active players to speak out about the European Super League.

The fallout from last night’s announcement has been huge, with the competition receiving widespread criticism from pundits and ex-players across the globe.

However, the PSG man becomes one of the first active names to publicly condemn plans for the breakaway competition.

“I fell in love with popular football, with the football of the fans, with the dream of seeing the team of my heart compete against the greatest. If this European Super League advances, those dreams are over, the illusions of the fans of the teams that are not giants of being able to win on the field competing in the best competitions will end.” Herrera wrote on Twitter.

“I love football and I cannot remain silent about this, I believe in an improved Champions League but not in the rich stealing what the people created, which is nothing other than the most beautiful sport on the planet.” He continued.

PSG have not been named in the initial 12 founding clubs of the European Super League.

How has the rest of the footballing world responded to the European Super League?

“The Premier League condemns any proposal that attacks the principles of open competition and sporting merit which are at the heart of the domestic and European football pyramid.

“Fans of any club in England and across Europe can currently dream that their team may climb to the top and play against the best. We believe that the concept of a European Super League would destroy this dream.DBLTAP Debrief – LoL Regional QualifiersPauseNext video0:01 / 2:00SettingsFull-screen

“A European Super League will undermine the appeal of the whole game, and have a deeply damaging impact on the immediate and future prospects of the Premier League and its member clubs, and all those in football who rely on our funding and solidarity to prosper.”

“Deduct them all points tomorrow,” he said.

“Put them at the bottom of the league and take the money off them.

“Seriously, we have got to stamp on this. It’s criminal. It’s a criminal act against football fans in this country, make no mistake about it.

“This is the biggest sport in the world and it’s a criminal act against the fans. Simple as that. Deduct points, deduct their money, and punish them.”

? | "I'm a #MUFC fan and I'm absolutely disgusted."
? | "They are an absolute joke."@GNev2 gave a brutally honest reaction to reports that England's biggest clubs are expected to be part of plans for a breakaway European Super League…pic.twitter.com/VfJccGYXjE

“We will consider all measures available to us, at all levels, both judicial and sporting in order to prevent this happening. Football is based on open competitions and sporting merit; it cannot be any other way. As previously announced by FIFA and the six Confederations, the clubs concerned will be banned from playing in any other competition at domestic, European or world level, and their players could be denied the opportunity to represent their national teams. We thank those clubs in other countries, especially the French and German clubs, who have refused to sign up to this.

“We call on all lovers of football, supporters and politicians, to join us in fighting against such a project if it were to be announced. This persistent self-interest of a few has been going on for too long. Enough is enough.”

“In our view, and in accordance with our statutes, any football competition, whether national, regional or global, should always reflect the core principles of solidarity, inclusivity, integrity and equitable financial redistribution. Moreover, the governing bodies of football should employ all lawful, sporting and diplomatic means to ensure this remains the case. Against this background, FIFA can only express its disapproval to a “closed European breakaway league” outside of the international football structures and not respecting the aforementioned principles.”

“Talk of a Super League is a move away from 70 years of European club football. Both as a player for a provincial team Dunfermline in the 60s and as a manager at Aberdeen winning the European Cup Winners’ Cup, for a small provincial club in Scotland it was like climbing Mount Everest,” Ferguson said.

“Everton are spending £500 million to build a new stadium with the ambition to play in Champions League. Fans all over love the competition as it is,” he said.

”The board members of the European Club Association (ECA) came together for a virtual meeting on Sunday evening, where it was agreed that the board’s decision from last Friday still stands,” said Dortmund chief executive officer Hans Joachim Watzke. ”This decision dictates that all clubs wish to implement the proposed reforms to the UEFA Champions League. The ECA board members took a clear stance in rejecting plans for the establishment of a Super League.”