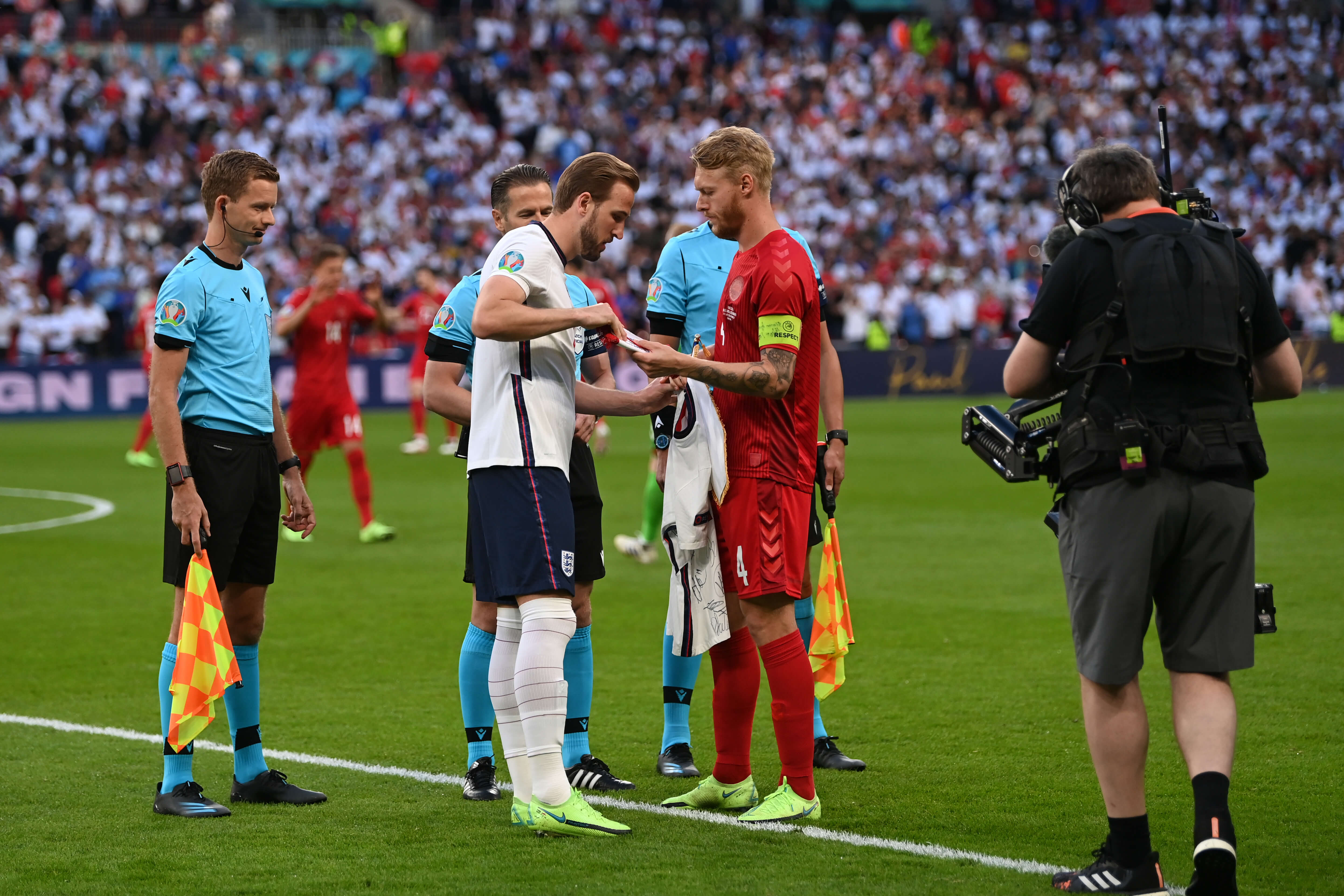 Prior to their Euro 2020 semi-final against Denmark, England paid a touching tribute to Danish midfielder Christian Eriksen at Wembley.

Eriksen suffered a cardiac arrest during the first half of Denmark’s opening fixture of the tournament against Finland.

Medical staff performed CPR on the pitch, and the midfielder was resuscitated before being rushed to hospital.

Denmark then confirmed that Eriksen was in a stable condition in hospital. After having an ICD device fitted, he was discharged and returned home to continue his recovery.

Before kick-off at Wembley last night, England presented Denmark with a Three Lions shirt that had Eriksen’s name, signed by all of Gareth Southgate‘s squad.

Harry Kane gave the shirt to Danish captain Simon Kjaer during the pre-match presentations. The action was then followed by a round of applause by those in attendance.

Kjaer began performing CPR on Eriksen shortly after he collapsed, and his actions could have saved his team-mate’s life.

Kane played at Tottenham Hotspur for over six years with Eriksen, who left the club last January to join Inter Milan.

The England captain told talkSPORT‘s Faye Carruthers earlier this week: “I spoke to him after what happened to him and wished him well.

“He sent me a quick message back to say he’s okay. I kind of left him alone. It’s been an emotional rollercoaster for not just him but his family as well.

“I’m sure he’ll be cheering against me on Wednesday, and rightly so. He will back his country all the way.”

Kane was on the scoresheet in a 2-1 victory for England on the night, which sent them through to their first major final since the 1966 World Cup.

UEFA have invited Eriksen, his wife and six medics to attend the final at Wembely on Sunday.

England will take on Italy in the showpiece event. Roberto Mancini‘s side defeated Spain on penalties on Tuesday evening and go into the game as seasoned pros of major tournaments.

Denmark team doctors confirm Eriksen to be fitted with heart-starter

UEFA responds to criticism over handling of Denmark vs Finland

Blind says he thought about not playing after Eriksen cardiac arrest

Denmark team doctors confirm Eriksen to be fitted with heart-starter

UEFA responds to criticism over handling of Denmark vs Finland

Blind says he thought about not playing after Eriksen cardiac arrest