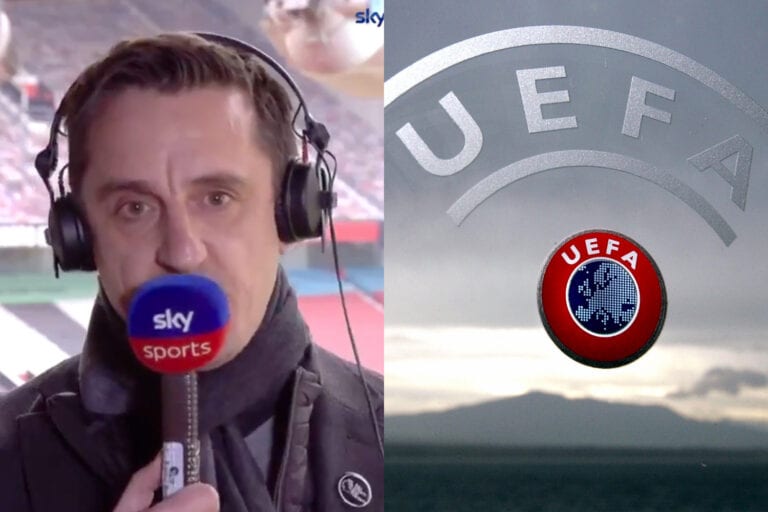 The world of football has been left stunned after last night’s confirmation of plans to push forward with a breakaway European Super League.

The new competition intends to serve as an alternative to the Champions League. However, as noted by many, it could end up leading to the expulsion of all 12 founding clubs from their own domestic leagues.

As news continues to break throughout the day, here are a few of the most notable reactions thus far.

“The Premier League condemns any proposal that attacks the principles of open competition and sporting merit which are at the heart of the domestic and European football pyramid.

“Fans of any club in England and across Europe can currently dream that their team may climb to the top and play against the best. We believe that the concept of a European Super League would destroy this dream.

“A European Super League will undermine the appeal of the whole game, and have a deeply damaging impact on the immediate and future prospects of the Premier League and its member clubs, and all those in football who rely on our funding and solidarity to prosper.”

“Deduct them all points tomorrow,” he said.

“Put them at the bottom of the league and take the money off them.

“Seriously, we have got to stamp on this. It’s criminal. It’s a criminal act against football fans in this country, make no mistake about it.

“This is the biggest sport in the world and it’s a criminal act against the fans. Simple as that. Deduct points, deduct their money, and punish them.”

? | “I’m a #MUFC fan and I’m absolutely disgusted.”
? | “They are an absolute joke.”@GNev2 gave a brutally honest reaction to reports that England’s biggest clubs are expected to be part of plans for a breakaway European Super League…pic.twitter.com/VfJccGYXjE

“We will consider all measures available to us, at all levels, both judicial and sporting in order to prevent this happening. Football is based on open competitions and sporting merit; it cannot be any other way. As previously announced by FIFA and the six Confederations, the clubs concerned will be banned from playing in any other competition at domestic, European or world level, and their players could be denied the opportunity to represent their national teams. We thank those clubs in other countries, especially the French and German clubs, who have refused to sign up to this.

“We call on all lovers of football, supporters and politicians, to join us in fighting against such a project if it were to be announced. This persistent self-interest of a few has been going on for too long. Enough is enough.”

“In our view, and in accordance with our statutes, any football competition, whether national, regional or global, should always reflect the core principles of solidarity, inclusivity, integrity and equitable financial redistribution. Moreover, the governing bodies of football should employ all lawful, sporting and diplomatic means to ensure this remains the case. Against this background, FIFA can only express its disapproval to a “closed European breakaway league” outside of the international football structures and not respecting the aforementioned principles.”

“Talk of a Super League is a move away from 70 years of European club football. Both as a player for a provincial team Dunfermline in the 60s and as a manager at Aberdeen winning the European Cup Winners’ Cup, for a small provincial club in Scotland it was like climbing Mount Everest,” Ferguson said.

“Everton are spending £500 million to build a new stadium with the ambition to play in Champions League. Fans all over love the competition as it is,” he said.

”The board members of the European Club Association (ECA) came together for a virtual meeting on Sunday evening, where it was agreed that the board’s decision from last Friday still stands,” said Dortmund chief executive officer Hans Joachim Watzke. ”This decision dictates that all clubs wish to implement the proposed reforms to the UEFA Champions League. The ECA board members took a clear stance in rejecting plans for the establishment of a Super League.”

The PSG midfielder hit out at the plans, accusing it of being an example of “the rich stealing” a huge part of the beautiful game.

Lukas Podolski made his feelings clear, taking to social media and calling the project “disgusting”.

Today I wake up to crazy news! ? An insult to my belief: football is happiness, freedom, passion, fans and is for everyone. This project is disgusting, not fair and I’m disappointed to see clubs I represented involved. Fight against this! ??❤️⚽️ #StopTheSuperLeague

“My reaction is probably similar to most people in the country, most football fans across Europe. It’s one of concern, a bit of worry where it will lead and the ramifications for football across Europe, particularly here.

“Where will it leave the Premier League? Will they try to kick these teams out? If not, who knows? It is very worrying.”

“I cannot stress more strongly how everyone is united against this disgraceful, self-serving proposals, fuelled by greed above all else.

“We are all united against this nonsense of a project. Cynical plan, completely against what football should be. We cannot and will not allow that to change.

“Players who will play in the teams that might play in the closed league will be banned from the World Cup and Euros.

“We urge everyone to stand tall with us as we do everything in our power to ensure this never ends up in fruition.”

“There are a lot of comments, arguments and opinions out there and I don’t want to get involved in it because I don’t know the details,” he said. “I’ve known the general details since yesterday (Sunday). I trust my role.

Chelsea head coach Thomas Tuchel says he trusts his club to make the right decisions after they agreed to be part of a European Super League. pic.twitter.com/470eqixa7q

“I’ve not seen the players today, we train later. We wanted to give the players more recovery time after the game against Manchester City. The best thing is to stay calm and focus on our match, which is maybe a little different than before.”

“I couldn’t tell you who the top six [English] clubs are, that is the first point,” Rooney told reporters.

“It is strange timing but I am sure there are reasons for that. The people in charge of these clubs are not stupid. Wait to see what the plans are. I want the English pyramid to be protected and rewarded.

“I am curious about the information rather than jumping the gun. The Premier League will always be a priority. Only when the information comes out will I give my true feelings on it.”

Portuguese footballing icon Luis Figo was quick to give his thoughts on this developing situation through his Twitter account, labelling it as a “greedy and callous move.”

This so called « Superleague » is anything but « Super ». This greedy and callous move would spell disaster for our grassroots, for women’s football, and the wider football community… (1/2)

(2/2) only to serve self-interested owners, who stopped caring about their fans long ago, and complete disregard for sporting merit. Tragic.

Fenerbahçe midfielder Ozil was another current player to hit out at the plans.

Kids grow up dreaming to win the World Cup and the Champions League – not any Super League. The enjoyment of big games is that they only happen once or twice a year, not every week. Really hard to understand for all football fans out there…⚽?

“La Liga strongly condemns the recently published proposal for a breakaway, elitist European competition that attacks the principles of open competition and sporting merit which are at the heart of the domestic and European football pyramid,” said the Spanish league.

“Today football fans across Europe can dream that their club, no matter the size, may excel, climb to the top and compete at the pinnacle of European football. La Liga defends this European tradition of football for all.

“The concept proposed by 12 European clubs destroys that dream, shutting the door to the top of European football, allowing in just an elite few.”

After declaring his opposition to a proposed super league format in 2019, Klopp said ahead of his side’s fixture with Leeds that his opinion hadn’t changed.

“I hope this Super League will never happen. With the way the Champions League is now running, football has a great product, even with the Europa League.” Klopp said in 2019.

“For me, the Champions League is the Super League, in which you do not always end up playing against the same teams.

Upon being asked about his stance this time round, Klopp responded: “My opinion didn’t change. Obviously I heard for the first time about it yesterday, and trying to prepare a game, a very difficult game against Leeds, and I knew so far we got some information, not a lot to be honest.

“It’s a tough one. People are not happy about it, and I can understand that, but I cannot say a lot more about it because we were not involved in any processes, not the players not me, we didn’t know about it. That’s the case or the fact, the facts are out there. We will have to wait to see how it develops.”

The #LFC manager explains his thoughts on the breakaway proposals and reveals him and his players were not consulted on the decision.

Leeds players warmed up in in t shirts ahead of their meeting with Liverpool featuring the Champions League logo, along with “earn it” printed on the front and “football is for the fans” on the back.