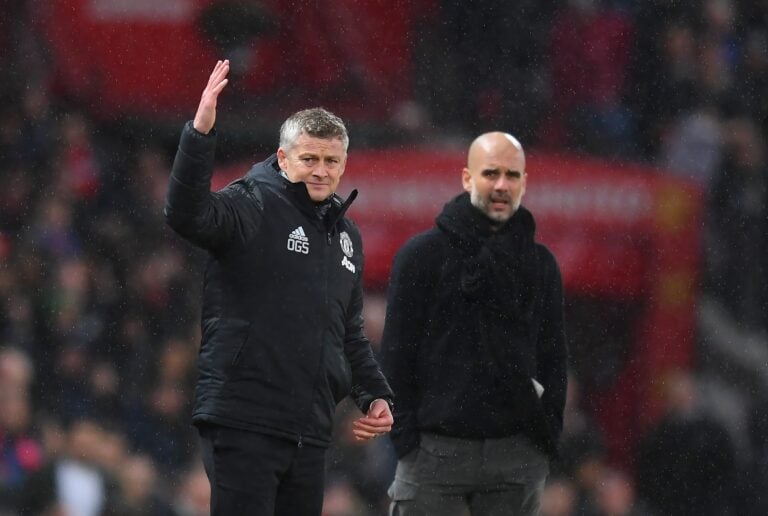 Manchester United and Manchester City have had contrasting fortunes on the pitch this season.

In the Premier League, United sit in sixth place on 17 points – four places and six points behind their Manchester rivals.

The scoreline that underlined that contrast occurred last Saturday. City were in control against United at Old Trafford, winning 2-0 and never looking under any real threat during the entirety of the 90 minutes.

It didn’t seem like it would be that way at the start of the season. United brought in the services of Jadon Sancho before the campaign got underway. Raphael Varane then joined in August.

Later came the star signing of Cristiano Ronaldo, back at Old Trafford after 12 years away. The signing of Ronaldo certainly created a frenzy on the day it happened, with reported interest from City circulating before United stepped in. With Ronaldo back at the club, United looked to be leading title contenders.

When you delve a little deeper, though, it becomes apparent that several recent United signings have been linked with City previously.

Of course, both teams have their recruitment setups and processes for analysing and signing players. But when it comes to signing the very best, it is natural that many of Europe’s biggest clubs would be involved in a brawl for players’ signatures.

As two of the top teams in world football, United and City certainly fall into that discussion as well.

Let’s take a look at times in which the two clubs went after the same player – and United paid out:

In the summer of 2017, Alexis Sanchez spoke of his desire to leave Arsenal. At that point, he had one year left on his contract.

All the talk from there seemed to be when – not if – he would join Manchester City. Pep Guardiola had worked with Sanchez during his time at Barcelona, so it seemed like a perfect match.

He agreed to join the Citizens on transfer deadline day, but Arsenal could not get a replacement through the door.

When it came to January, City were again interested in signing the Chilean. But by the end of January, Alexis Sanchez was a Manchester United player, signing a four-and-a-half-year deal.

Unfortunately for both parties, the transfer didn’t work out.

Sanchez made 32 appearances in his two seasons at United, scoring just three goals. Would he have fared any better at City?

City interest in Fred – before he is United bound

In the same year as the completion of the Sanchez deal, City held an interest in signing Fred from Shakhtar Donetsk.

The player himself even confirmed to ESPN Brasil (via HITC) that Pep Guardiola was keen on signing him.

Goal later reported that City’s interest in the Brazilian midfielder had cooled. In the summer, United swooped, making Fred their fifth most-expensive player at a fee of around £53 million (via Transfermarkt).

City, meanwhile, stuck with what they had in central midfield. They won the title with 98 points, whilst United finished sixth. Fred only made 17 league appearances in his debut season.

As for Varane, The Athletic reported that City held “informal interest” in the centre-back earlier this year. They were in direct competition with United, who eventually got their man in August. Were City ever genuinely interested in signing the Frenchman? That is unclear.

Then there’s the case of Ronaldo. One of the greatest players of all time was, it seems, given a choice. United or City?

A move to United held a lot of attractions, naturally. A return to the club where he had established himself as one of the best in the world. And a reunion with fans that still chant his names passionately as they did during his first spell.

A phone call with his former manager, Sir Alex Ferguson, did the trick, as per The Athletic. Ronaldo was back.

On an individual level, Ronaldo’s return to Old Trafford has gone well. He has netted four goals in eight Premier League games and five in four Champions League appearances. The European goals have rescued United at least a point on several occasions.

Perhaps one of United’s motivations to sign the Portuguese icon was fuelled by a desire not to see him produce those numbers at City.

But there is no doubting the positive effect Ronaldo can have on any team. It may not yet have shown in the Premier League results, but his return has had an impact. Has he had more impact than he would have had on City?