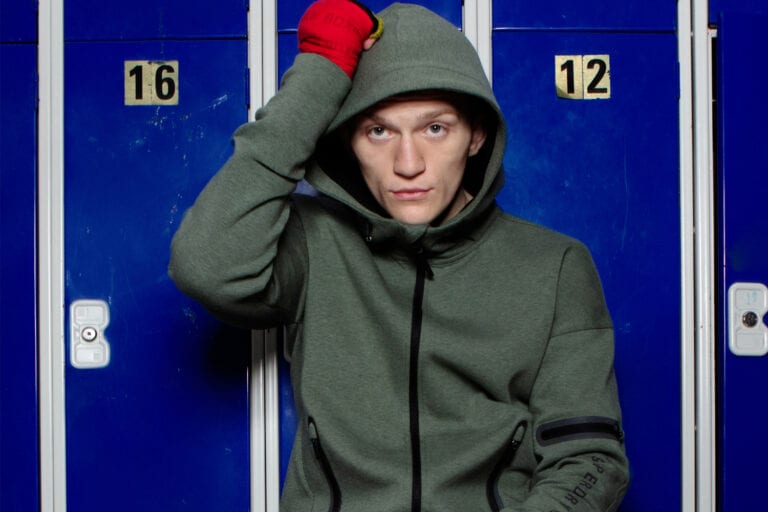 Stepping into the world of professional boxing is a mammoth task for any young fighter, doing it when your dad is one of the most popular figures in recent British boxing history? You don’t really have the luxury of flying under the radar as you find your feet.

Despite that extra pressure, Campbell Hatton recently made it two wins from two, defeating Levi Dunn in the very arena his old man called home for so many years.

Following his victory, we caught up with Campbell to talk about the legacy he wants to leave behind, comparisons with his dad, AJ vs Fury and his recently announced partnership with Superdry.

Read the full interview below:

Was there ever a point where you thought about venturing down any other road than boxing?

Yes, I hadn’t always wanted to be a boxer from a young age. I always enjoyed doing it as more of a hobby and I was about fifteen when I was unsure about what I wanted to do… so turned my hand at a few things! This only made me realise that I actually just wanted to knuckle down (pun intended) with boxing and work towards doing it full time.

Comparisons with your dad are going to be inevitable, is that something that ever gets frustrating?

Yes, they can be frustrating. Having said that, I’ve got a good man in my corner, my uncle Matt, who had to manage that within his own career too. He’s been a real support to me, advising how he dealt with it and I couldn’t ask for anyone better to be giving me guidance at the start of my own journey.

With that being said, there’s obvious similarities between you and your dad’s fighting styles, but what are the biggest differences in your opinion?

My dad and I are both very similar, in and out of the ring. Although I’d say the main difference between us is that I’ve got his wisdom of what to do – and what not to do – at his age, which he never had passed onto him. For instance, we both like a little treat in between fights, but from his experience, I’ve learnt not to go mad with it!

Is there anyone else you’ve particularly looked to and maybe taken some kind of influence from when developing your style?

Yes, my uncle Matt and dad are obviously a big part of that, but another influence I used to model my style on was Canelo Alvarez. I think he’s that well-rounded boxer who’s a come-forward and aggressive fighter, like myself, but so defensively strong as well. If I can take any inspiration from him, I don’t think I can go far wrong!

Even without fans in attendance, how special did walking out in Manchester feel? Did the nerves threaten to kick in at any point?

It was a shame that there were no fans at the Manchester Arena because I had always imagined myself boxing in front of a packed-out crowd. I was still absolutely buzzing about it though because it was another goal ticked off the list, and one I’d always wanted to do. The people I’ve looked up to have been there and done it that, so crowd or no crowd, it was still special.

In fifteen years’, time, when you’re looking back on your career, what would it take for you to deem it a ‘success’?

For me, a successful career in fifteen years’ time will be being able to look back and know that I did absolutely everything I could have done and not have any “what ifs”. As long as I continue to put everything into it, I do believe I can get to a very top level and be a world champion one day.

One of the biggest talking points in the boxing world is of course, AJ vs Fury – which way do you see that going?

I’m split right down the middle with the AJ and Fury fight. If it goes to points, I think it favours Fury to be honest, with his movement and his awkwardness. Having said that, I find it hard to believe that AJ wouldn’t catch him, and if he does, he’ll just take him out because he’s that good a finisher!

Which fighters do you most look forward to watching at the minute?

At the moment, my favourite fighters to watch are Canelo Alvarez, Josh Warrington and the heavyweights as well, AJ, Fury and Dillian Whyte… The list can go on, it could be endless!

There’s obviously this new trend of YouTube personalities stepping into the boxing ring, Mayweather fighting Logan Paul etc, it seems to be something that’s extremely divisive in fighting world. What’s your take on it?

I wouldn’t say I was against YouTube boxers as such, because I think everyone deserves respect for getting in the ring no matter what level. The numbers and new audience they bring is good for boxing. However, the only thing I would say that I am more against, is when they start claiming to be the elite. When it’s acknowledged for what it is, I don’t see any problem with it, but I do believe you need to respect the levels of boxing.

Joining Superdry, you’re obviously working alongside a massive globally recognised brand, at 20-years-old, is that something that feels a bit overwhelming?

Yes, it was a bit overwhelming when I first started working with Superdry! They are a massive brand, one I’ve respected and known about for years, so it all felt a bit surreal. Although, after I’d met everyone, and they were all so down to earth, it did make me feel at home and I was comfortable right away.

What was it that made you want to join up with the brand?

To be honest, for me, it was a no brainer to join forces with Superdry. I’ve been a big fan of the brand for years and when I saw the new Sport collection, especially their Train category, I was really excited to get involved. I’m on board with their goal of maximising your potential in sportswear and expressing your own style, while still performing to the best of your ability – which I aim to do every time I train. I love wearing all my gear, it’s ideal for the long hours of training, I’m never without my Training Gymtech Hoodie and Heavy Padded Jacket now!