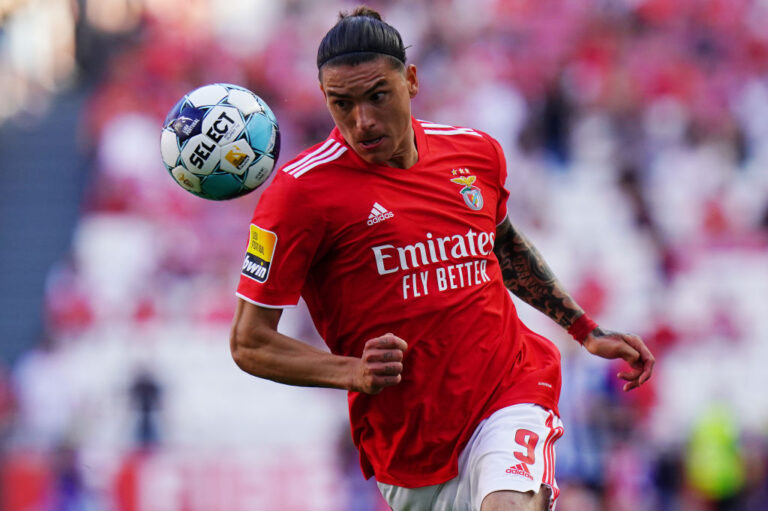 Portuguese media are reporting that Liverpool have made a massive offer for Benfica striker Darwin Nunez.

The highly-rated forward has been linked with a host of clubs throughout the season, and appears to be Jurgen Klopp’s desired target this summer.

Liverpool set for a busy summer

It looks like there will be plenty of activity in and out of Anfield this summer. Super-sub Divock Origi will depart, while Africa Cup of Nations winner Sadio Mane could follow him out of the club.

The Senegalese international has been the subject of a potential switch to Bayern Munich. Liverpool have rejected two bids for his services from the German giants. Meanwhile, the Reds have been linked with a host of potential replacements.

The rumour mill is in full swing

Rumours are swirling about the futures of Mane, Roberto Firmino and even Mohamed Salah.

Names such as Barcelona’s Ousmane Dembele and Nunez have cropped up regularly as options for Liverpool.

Dembele will become a free agent this summer when his contract expires at Barcelona. Therefore, the Frenchman will be free to choose a new destination.

Liverpool have emerged as one of his options. However, the winger also has interest from Chelsea and Paris Saint-Germain, so competition is fierce.

The Daily Mirror reported that the 25-year-old was “closing in on a transfer to Chelsea.”

Darwin Nunez currently plies his trade for Portuguese giants Benfica. The Uruguayan is familiar with Liverpool, though.

The striker scored away to the Reds in the quarter-final of the Champions League last season, when Klopp’s side ultimately eliminated Benfica.

Now, Portuguese publication A Bola is reporting that Liverpool have recently moved towards acquiring the services of Nunez.

The figures behind the deal

A Bola report that the Reds made an initial proposal of €70 million. This includes an additional €30 million to be paid based on targets. Benfica rejected this offer.

Liverpool have returned with a new offer of the same overall value. However, they have offered €80 million upfront, and 20 million based on targets this time. Benfica are reportedly considering this offer.

A Bola also expects Benfica to counter this offer with a request for an even higher proposal.

Where would it rank against Liverpool’s highest transfer fees?

A fee of €100 million equates to roughly £85 million. Therefore, if Liverpool secure the signing of Nunez, he will become their record signing.

Centre-back Virgil van Dijk is currently the record transfer at the club. The Merseysiders paid Southampton £76 million for his signature back in 2018. That now seems like a bargain.

The signing of Nunez will be a big coup for Klopp’s side, especially given Manchester City‘s recent addition of Erling Haaland. January signing Luis Diaz has also hit the ground running at Anfield. This means that the Reds should be able to cope with the departure of Mane very well.