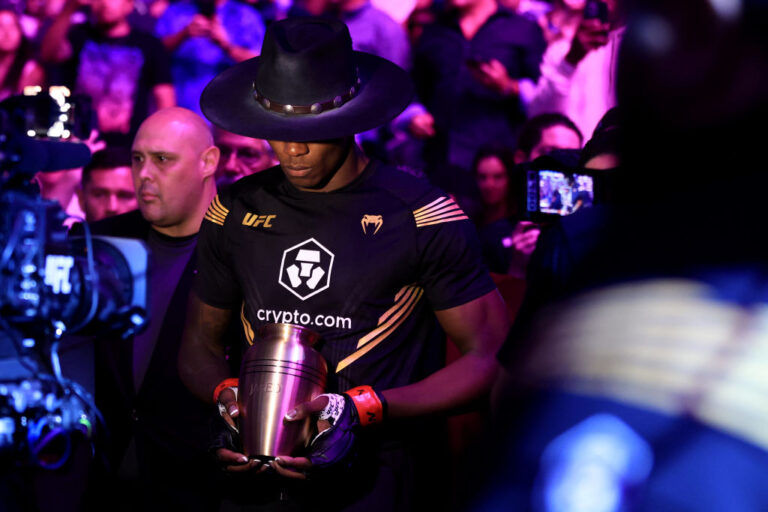 Israel Adesanya produced a tremendous performance to retain his title against Jared Cannonier at UFC 276, but it was his tribute to WWE legend The Undertaker that really got people talking.

On June 2, ‘Stylebender’ proved that the road to middleweight gold still runs through Auckland, New Zealand. Despite the best efforts of the challenger, Adesanya cruised to victory as he showed off his array of blistering kicks and precise punches.

As the contest came to a close, the Kiwi had his hands lifted in the air, and the belt wrapped firmly around his waist. However, due to the contest failing to catch fire in the way fans had hoped, the focus of the evening centred around his incredible walkout.

The 185-pound King left the 20,000-strong crowd in awe as the music of ‘The Deadman’ blasted into The T-Mobile Arena. Fitted with a black hat, and an urn with ‘Jared’ inscribed across the front, Adesanya made his way to the Octagon in front of WWE authority figures Vince McMahon, Stephanie McMahon and Triple H.

Although the former world kickboxing champion didn’t stop Cannonier as his entrance suggested, he still made a huge impact, with some fans branding it “the greatest walkout of all time“.

But how did the 32-year-old come up with the idea?

In a post-fight interview with Caroline Pearce and BT Sport, he revealed: “Tuesday was the day I came up with that with my friends, just sitting down and pondering. But I didn’t realise the McMahons were in the house tonight. That was kind of cool. Triple H, too.

“But yeah, I’m just a kid who grew up during the Attitude Era. Wednesday nights during wrestling, I’d play those tracks, like the Batista entrance, Stone Cold entrance, just to get the mood while we wrestle when we’re in the trenches, and even The Undertaker’s theme.

“So yeah, it comes to me. I let these things come to me for the show.”

Adesanya later confirmed that competing in WWE still stands at the top of his bucket list.

“Definitely. That’s something I’d try my hand at later on. Just for fun.”