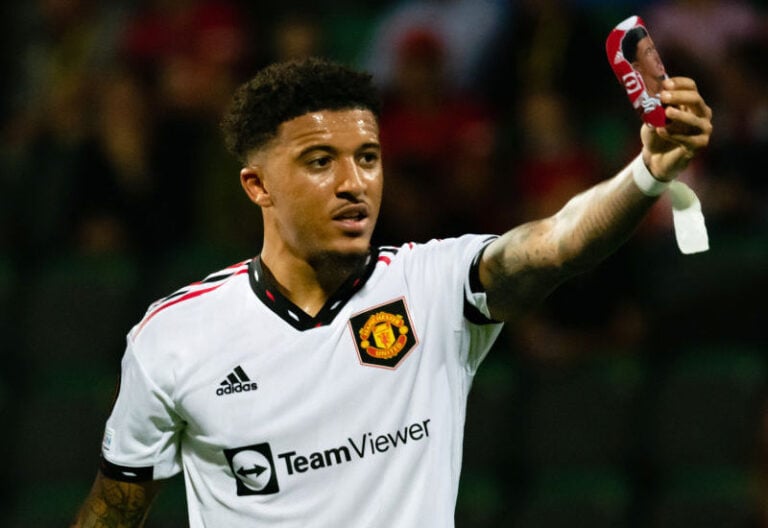 Jadon Sancho has revealed the reason why he performed a new shinpad celebration during Thursday’s night round of Europa League fixtures.

On September 15, Manchester United travelled to Moldova for their Europa League clash against Sheriff. And following a 1-0 loss to Real Sociedad on matchday one, they desperately needed to get three points on the board.

After a resurgence on the domestic scene, Erik ten Hag motivated his men to go out there and perform. They were quick from the off, and after just 17 minutes, they found the breakthrough.

Christian Eriksen delivered a beautiful ball to Sancho, who left the defenders for dead and buried the ball into the back of the net. Later in the game, Cristiano Ronaldo converted from the spot to seal a 2-0 victory. However, the result wasn’t the only thing that got the fans talking.

Directly after scoring his goal, the forward lifted a single shinpad in the air. The reason behind this wasn’t immediately apparent – but Sancho cleared everything up after the match

He explained (quotes via the Daily Mail): “‘Yeah, a little kid gave me some shinpads and asked me to wear them. I said, ‘Yeah, no problem’, and that was a little gesture from me when I scored, showing him that I was wearing his shinpads that he gave me.”

A video emerged on social media of Sancho signing an autograph for a supporter who had approached his car. The young fan gave his hero a pair of specially designed shinpads, with his face on the front of them.

The child’s father suggested he wear them for a big game, and the United star obliged.

The 22-year-old later added: “It was really important we got the win today. Obviously, our last home game vs Real Sociedad was an upset. And coming into this game, we knew we had to get the three points today.”