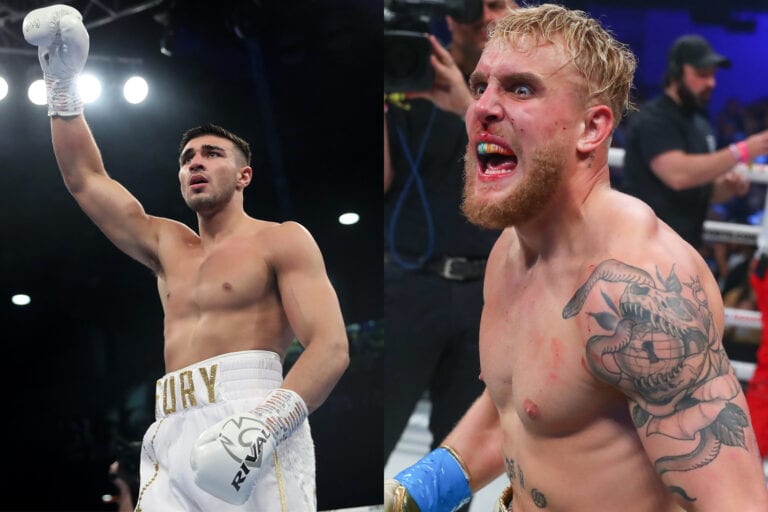 Jake Paul has responded to Tyson Fury‘s social media call-out – and it quickly prompted a fight offer from half-brother Tommy.

Tyson took to Twitter on Monday to congratulate Tommy after he defeated Scott Williams inside two rounds on Saturday night.

He then closed the tweet with the line: “@jakepaul where are you at?”, referring to a potential future fight between Paul and his half-brother.

He answered Tyson’s call on Tuesday – and claimed he didn’t even know he had a brother.

In an Instagram video, Paul explained: “I wake up and see Tyson Fury, the heavyweight champ, tweets me and he was talking sh*t about Canelo [Alvarez] too, saying it [his fight against Avni Yildirim] was boring or that no-one was watching and I was laughing along with it.

“Then I get to the bottom of the tweet and I see that he calls me out to fight someone, and the tweet’s about his brother, and I was like, ‘I didn’t even know he had a brother’.”

“But my point is here, you’re Tyson Fury’s little brother, if you want to fight me, don’t let your big bro do sh*t for you, log on to Instagram and Twitter and call me out for yourself, bro.”

With social media the preferred method of communication between the pair, Tommy responded to Paul on Twitter.

In a video, he said: “So, I see somebody is having a little bit of something to say.

“Mr Jake Paul, I don’t need anybody to do my dirty work, I’m calling you out myself right now.

“You can fight me any time, any place, anywhere. All you’ve got to do is get in touch.”

Paul is first set to take on former UFC star Ben Askren on April 24. The 24-year-old is favourite amongst the bookmakers to record what would be his third professional victory.

His brother Logan is scheduled to take on Floyd Mayweather Jr. in an exhibition match later this year, despite the original date of February 20 being postponed.