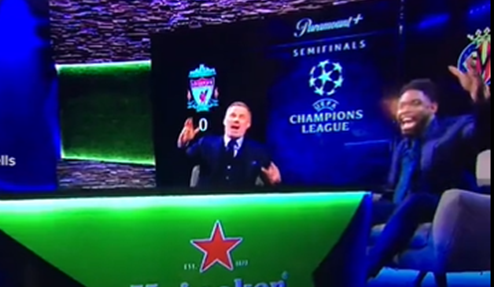 When Jamie Carragher and Micah Richards are together, there is always time for laughs.

This time around, the pair were hilariously singing and dancing during the half-time interval of Liverpool’s 2-0 victory over Villarreal in the Champions League.

In front of an expectant Anfield crowd, the Reds found the Spanish side a hard team to break down. Liverpool could not create an opening despite dominating possession throughout the first half. The sides went into half-time with the score at 0-0.

Jurgen Klopp’s side turned up the pressure in the second half – with their hard work finally paying off. After a one-two with Mohamed Salah, Jordan Henderson attempted a cross that took a big deflection. This completely wrong-footed the Villarreal goalkeeper Geronimo Rulli, who could only get his fingertips to the ball as Liverpool took a deserved lead.

Almost immediately, the home side doubled their advantage. A beautiful shimmy from Thiago sent Liverpool hurtling towards Villarreal’s penalty area. Again, Salah was heavily involved as he poked the ball through to Sadio Mane. The Senegal international beat the offside trap and slotted home to put the Reds 2-0 up.

It was a dominant performance from Klopp’s men, who have a commanding advantage to take to Spain for the second leg. As a result, Liverpool’s hopes of an unprecedented quadruple are still very much alive.

Reds legend Jamie Carragher very much enjoyed the quality of Liverpool’s performance. Having watched Micah Richards celebrate Manchester City’s first-leg win over Real Madrid on Tuesday, Carra seized the opportunity to have a dance himself.

Read: Micah Richards screams pasta out of his mouth, Jamie Carragher analyses it in slo-mo

Despite it only being half-time, Spanish midfield maestro Thiago had impressed the Sky Sports and CBS pundit. Such was his admiration, Carragher started singing and dancing a song in the Spaniard’s honour.

Never one to shy away from a dance, Micah Richards couldn’t help but join in with the performance of Jamie Carragher.

(Un)fortunately for viewers, the singing was short-lived. Following the host’s intervention, the pair quickly fell back into ‘pundit’ mode.

To be fair, if there was one Liverpool player to make a song and dance about, it’s Thiago. The midfielder’s recent performances have been scintillating.

The former Bayern Munich midfielder ran the show against Manchester United last week. During Liverpool’s 4-0 win over the Red Devils, Thiago pulled the strings in a near-perfect game.

He completed 105 passes, with a 96% completion rate. In addition, he created three chances and helped out defensively. The Spaniard won seven of his nine duels whilst contributing three tackles and two interceptions.

But even away from the stats, the way in which Thiago made difficult passes look easy blew everyone away.

He carried this form into last night’s Champions League semi-final. Thiago won the man of the match award as he controlled the game’s tempo in Liverpool’s engine room. All he needed was a goal to cap off another impressive match – and he nearly got one.

The midfielder smashed a thunderous strike from range toward the end of the first half. Sadly, his effort cannoned off the post.