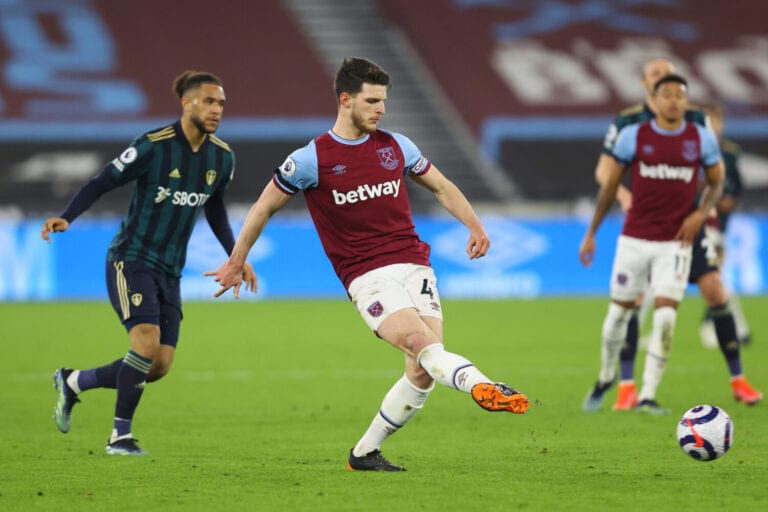 Jamie Carragher has praised West Ham midfielder Declan Rice for his passing and offensive abilities – and says that he is more than just a holding midfield player.

Rice has been a key player for West Ham this season, and has been on the pitch for every minute in the Premier League.

He has formed a strong partnership with Czech international Tomas Soucek in the centre of the Hammers midfield. Plaudits for Rice’s performances have arrived from across the country.

And Carragher has been impressed with Rice and his all-round development into a top Premier League footballer.

Speaking to Sky Sports on Monday Night Football, he explained: “He is a fantastic player, he really is. I’m a huge fan of his and you can see he thinks about his game.

“You hear him talk about Yaya Toure, Patrick Vieira bursting forward – he’s not thinking of himself as just a sitting midfield player.

“I think he almost got pigeon-holed with and he was ‘always going to end up as a centre-back’.

“And I’m like ‘I’m not quite so sure – I think he’s a really good midfield player’.

“I think his passing is really good – I like that, he drives forward, very rarely gets beaten one on one, [he’s] got that real physical strength as well in his upper body.

“I think he’s a top player. But when you’re talking about getting more goals and assists, when you’ve got a guy next to you [Soucek] who has already got eight goals, it’s very difficult to be that man, because you’ve got to sit there.”

Jesse Lingard and Craig Dawson both scored in a 2-0 victory over Leeds United at the London Stadium – although Rice admitted the Hammers were not at their best.

The win moves Moyes’s side back to fifth position in the table, two points behind fourth-placed Chelsea.

The Hammers are next in action when they travel to Manchester United on Sunday evening.