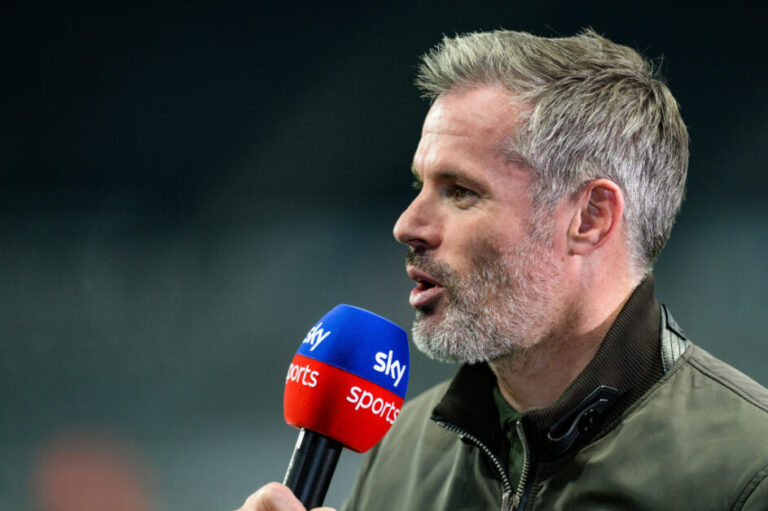 Jamie Carragher has hit back at criticism over suggestions that Manchester United should steal Thomas Tuchel by labelling Chelsea fans as “hypocrites.”

Speaking ahead of Manchester City’s goalless draw away to Crystal Palace on Monday evening, Carragher explained his thoughts on the situation unfolding at Chelsea. Following former owner Roman Abramovich saw his assets frozen by the United Kingdom government, questions hung over the club’s future.

While Chelsea may have won everything available to them under Abramovich’s tenure, the disgraced Russian oligarch leaves West London with his legacy in tatters. Sanctions placed on the 55-year-old mean the Blues cannot operate as usual unless the club finds a buyer.

Despite reports of potential suitors already lining up bids, the rumour mill is already in full swing. Currently unable to renew contracts, Antonio Rudiger, Cesar Azpilicueta and Andreas Christensen are all expected to leave Stamford Bridge.

However, much of the speculation surrounds Chelsea boss Tuchel, with many tipping the German for the vacant United job. Amongst those suggesting the 48-year-old should switch London for Manchester is former Liverpool legend turn pundit Carragher.

Unhappy with the shout, Chelsea fans were quick to call out Carragher’s advice for Tuchel. The Blues supporters believed it was wrong to advise United to take advantage of Chelsea’s difficult situation.

Despite this, Carragher stood by his word on Monday Night Football, hitting back at Chelsea fans. During an impassioned address, the 44-year-old exposed the hypocrisy of Chelsea’s previous transfer dealings:

“The Chelsea supporters, the same as any supporters, are very passionate about their club. At this moment, they think the world is attacking them; I totally get that,” explained Carragher.

“The reason why I think it’s a little bit hypocritical of Chelsea supporters is… teams are going to try and take advantage of them.”

Following his acquisition of the club in 2003, Abramovich ushered in an era of change in English football. No longer did the traditional elite hold all the power in the Premier League, with Carragher critical of their initial approach:

“Chelsea have been doing that for 20 years now. That was the big thing about Roman Abramovich coming. We can throw our money about and get whoever we want.”

Eventually going on to highlight deals for players like Ashley Cole as examples, Carragher shone a light on the methods used by Chelsea in previous transfers:

“We’ll [Chelsea] go to Liverpool and try to get the best midfielder in Europe. Destabilise that club for two summers.”

Referring to the attempts by Chelsea to sign Steven Gerrard in the summer of 2005, a displeased Carragher took no prisoners during his rant. Furthermore, the ex-Liverpool defender pointed to Chelsea’s ‘act first, answer questions later’ policy:

“We’ll [Chelsea] get caught tapping up, doesn’t matter, we’ll pay the fine. Don’t worry, we’ll get caught with that.”

Carragher exposed the policies Chelsea has operated with over several years. As a result of the sanctions placed on the club, various big names will likely depart in the coming months. Above all, the future success of Chelsea as a club hangs in the balance while the ownership question remains unanswered.