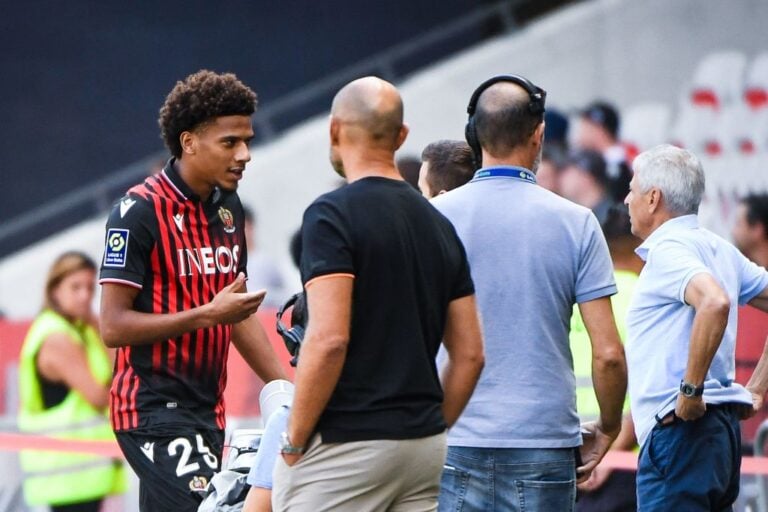 Nice defender Jean-Clair Todibo was sent off just nine seconds into the Ligue 1 game between Nice and Angers on Sunday.

The sending-off is the quickest ever recorded in the history of the French top division. From kick-off, Angers sprinted forward towards Nice’s goal, with Todibo taking out the onrushing Abdallah Sima.

The referee, therefore, had to decide whether or not the defender to the right of Todibo would have been able to cut him off.

The official decided he wouldn’t, and sent the former Barcelona centre-back for an early bath. In addition, as per FotMob, it is the fastest red card since Opta began recording data on France’s top flight in 2006.

What did Jean-Clair Todibo say after the red card?

Following on from the humiliating scene of walking back to the dressing room under a minute after starting the match, Jean-Clair Todibo reserved some strong words for the officiating.

He tweeted: “An arbitrary choice that shocks me and condemns my team to start the match with a big disadvantage. The decisions of the referees at the start of the season are very questionable, even scandalous and I hope the LFP will do something to remedy it.”

Nice went to lose the match 1-0. Ex-Tottenham midfielder Nabil Bentaleb scored the only goal on 43 minutes. Furthermore, Angers went down to 10 men themselves later on in the match. Another former Premier League player – ex-Southampton winger Soufiane Boufal – saw a second yellow card for diving.

The result moves Angers out of the Ligue 1 relegation places. They are in 14th position. Nice, meanwhile, are 13th, and above their opponents on goal difference.