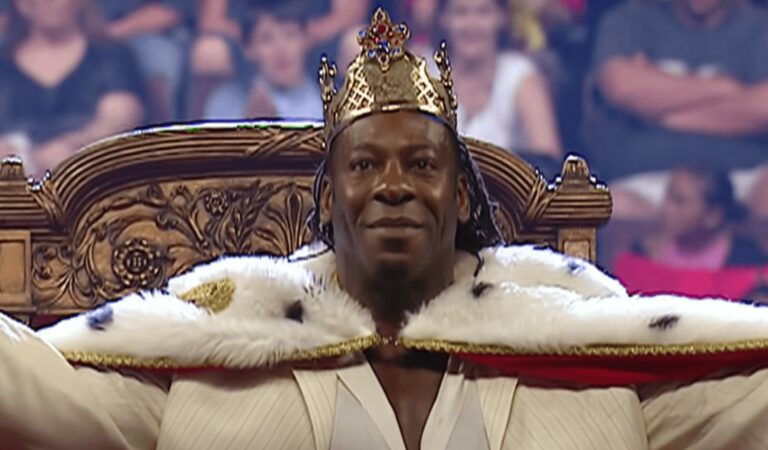 Wrestling legend Booker T has named his all-time ‘Mount Rushmore’ of WWE stars past and present.

Booker T was a full-time WWE Superstar between 2001 and 2007, having previously enjoyed a lengthy stint with WCW. When the latter went bankrupt, Booker joined WWE after it purchased the promotion he formerly wrestled for.

His first act in WWE (then still known as WWF) was to attack ‘Stone Cold’ Steve Austin. The pair would embark on a feud, which involved Booker costing Austin the Undisputed WWF Championship, a bizarre yet hilarious supermarket brawl, and ‘Stone Cold’ chasing his rival around a bingo hall.

He subsequently went on to have feuds with the likes of Edge and Kurt Angle, before winning the King of the Ring tournament in 2006. Known as ‘King Booker’ from that point, the victory – and subsequent gimmick – is widely acclaimed as some of the best work of his wrestling career.

Booker departed WWE in 2007, and wrestled for other promotions. He returned in 2011 as a color commentator and occasional wrestler. He has teased making a one-off return to the ring this week, but now makes sporadic appearances as a commentator.

But who did he name in his WWE ‘Mount Rushmore’?

Speaking on his podcast, ‘The Hall of Fame with Brad Gilmore‘, Booker T named the four wrestlers he believes are the greatest to have set foot in WWE.

His first choice was an obvious one, with ‘Stone Cold’ Steve Austin getting the nod. He won 13 titles in WWE, including the Million Dollar Championship, and three Royal Rumbles. But Austin is best known for being the key driving force of the Attitude Era, receiving unrivalled crowd reactions and taking part in classic segments.

Another critical figure in the Attitude Era was The Rock, who is also named in Booker’s Mount Rushmore. Alongside his 17 titles, one Royal Rumble win and captivating promo abilities, The Rock competed in three classic WrestleMania matches against Austin, winning one of them.

Furthermore, Booker chose Triple H and John Cena as his other two Rushmore entrants. Cena was the face of company for much of the early 2010s, and has 16 world titles to his name. Triple H, meanwhile, is now WWE head of creative, but won an incredible 24 titles as a wrestler. He also won the Royal Rumble twice.

Explaining his choices, Booker T revealed: “I’m not one of these Rushmore-like type guys. But as far as WWE Mount Rushmore, it would definitely be Stone Cold Steve Austin, The Rock, John Cena and, probably, Triple H.

“Those guys, man. They did some extraordinary stuff. I got a chance to watch it from afar, when I was at WCW, and I watched those guys create their magic. And I was in awe of what they were doing. I wanted to be a part of it so bad.

“But I was happy at WCW, making my money and not having to work in the cold cities. But I tell you. Those guys, I’m serious, man, they did some amazing stuff back then. And I had a hell of a time watching it.”