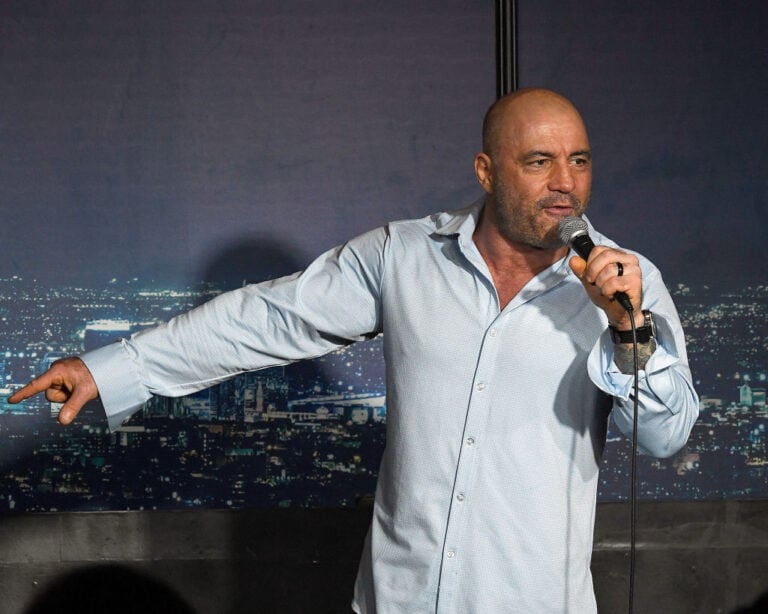 Joe Rogan has caused public outrage with his comments on how the USA should deal with homeless people.

On his podcast, ‘The Joe Rogan Experience,’ Rogan stated that homeless people should be shot.

The presenter is no stranger to controversy. His podcast is renowned for delving into divisive topics and delivering outlandish statements.

Joe Rogan never shies away from speaking his mind, and he often receives backlash due to his comments.

Joe Rogan has come under a lot of heat in recent years due to his promotion of divisive topics. His sweeping statements rile people up, which he seems to enjoy.

During the Covid-19 pandemic, the podcast host received a lot of flak from health experts after using his platform to spread misinformation.

In addition, Rogan has said previously said the N-word and promoted numerous conspiracy theories. Over the years, he has also made misogynistic, homophobic, and transphobic statements.

Rogan brands himself as open-minded. However, this can lead to extreme ideologies being given a platform they otherwise wouldn’t have.

On his podcast, he discussed the issue of homelessness.

In America, homeless people make use of old dressers and shoe racks in order to gain some comfort on the streets.

Rogan’s guest Tom Segura said: “I didn’t know also that – do you know when you see stuff like that on the streets, at least in Los Angeles or maybe in California, those are – that’s protected property, like by law. Do you know that?”

“So you’re not supposed to do that?” asked Rogan.

Segura added: “But like that’s that person’s property by law if you were to go -“

“Yes, absolutely. If you were to go and move that or take that -“

Rogan reacted to this: “Hilarious. But they wouldn’t shoot you if you shot somebody. Maybe we should just go and shoot the homeless people.”

Why did Rogan air these views?

Rogan’s added his reasoning for these comments.

He said: “Nobody does anything about violent crime in LA anymore. It’s a f***ing joke.”

He may have made this comment as an outlandish means of getting the attention of the police to act more in areas such as Los Angeles. However, the backlash Rogan has received is huge, and it has tarnished his reputation further.