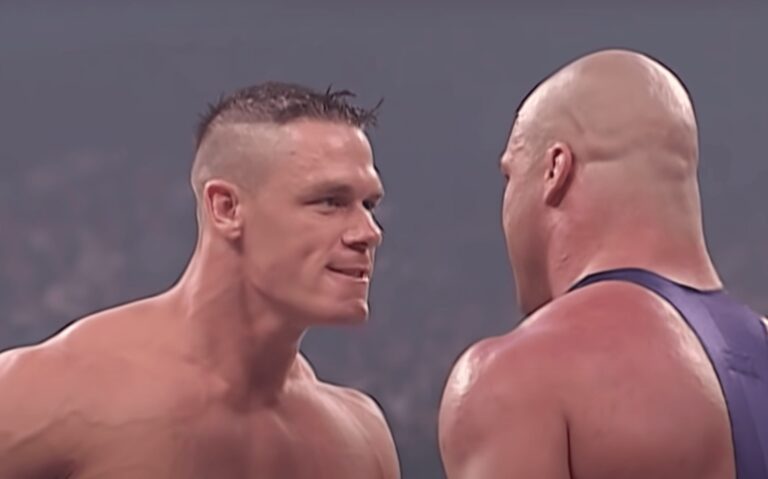 John Cena has recently gone all-in on why he didn’t like his WWE debut performance against wrestling icon Kurt Angle.

Throughout his illustrious career, the 16-time world champion has solidified himself as one of the greatest performers of all time. With the power of a truck and the heart of a lion, the American always produced spectacular showings and slowly but surely became the face of the company.

But while his in-ring moments helped bolster his star, he really rose to fame through his exploits on the mic. There’s no denying that Cena is one of the most charismatic superstars in wrestling history.

His antics as ‘The Doctor of Thuganomics’ elevated him to the top of the tree in WWE. Cena’s popularity is as high as ever at this point in his career.

Thus, with his 20-year-anniversary in the business coming up, WWE are throwing a huge celebration. On June 27, on Monday Night Raw, the legend will return to the ring to receive the plaudits for his amazing career.

In the last two decades, he’s headlined WrestleManias and won 16 world titles – a joint record in WWE. But before the glitz and glamour of the pinnacle of the sport, his journey in the world’s leading wrestling promotion began on a 2002 summer night at the Allstate Arena in Rosemont, Illinois.

The Hollywood icon appeared on an episode of WWE Playback earlier this week to reflect on a thrilling encounter with Angle.

Although he lacked experience, the company had no issue throwing him in at the deep end. In fact, they only let him know a matter of hours before that he’d be competing at all. Before this, he’d only met Vince McMahon once during a meeting with Michael Hayes, who he told: “cut his [Cena’s] f***ing hair.”

That night, the Olympic medalist issued an open challenge, which Cena gladly accepted. The pair began brawling, and 20 years on, the debutant has revealed what he’d have done differently.

The wrestler said: “I think I would embody the words ‘Ruthless Aggression’ more. Like, I came out looking like a normal person, doing normal stuff. The beginning of the match seems to be pretty aggressive and ruthless, and fast. Thank you to Kurt for making me look so good, so quick.

“You look back on stuff like this, and I definitely could’ve done better with the idea of Ruthless Aggression and … embodied it more, rather than just wear boots and tights, which is a rabbit hole we find a lot of ourselves going down. My look will identify my character, which is a bit of it, but it’s also demeanour, and nuance, and all that.”

He later explained: “See, people aren’t interested because they’re waving their hands or getting their signs in on TV. They’re showcasing themselves, which means they’re not interested. But I would look at it, if I watched it back, I was probably like, ‘Man, did my moves look good?’

“And now, I would watch it much differently and say, ‘Ok, they’re only kind of interested in that. What could I have done to gain their interest?”

He added: “If we had just slowed down, people would’ve been more interested.”

Ultimately, John Cena lost the match and headed backstage to shake hands, when he bumped into WWE icon, The Undertaker.

The 16-time world champion looks back on meeting The Undertaker

“Here I am, marvelling at my own hand as The Undertaker shook my hand. If I really embodied ruthless aggression, I’d have kicked him in the nuts or say, ‘I’m going to take that Championship in a week or so’.”

He concluded: “Man, it’s not a shame because it’s a good learning experience, and the story turned out ok. But especially now, after I see the match, I see the audience, where they lose interest.

“You have to slow down and tell the story. And just doing what I was told in performances like that almost got me fired. And I can see why, because if you look at the audience, nobody cares.

“So I don’t know. I guess looking back on it, I’m grateful for the moment. I’m grateful I debuted in such a historic arena, with such an amazing performer.

“But I’m also grateful it didn’t go well, because it taught me to, especially when the Doctor of Thuganomics character was introduced, I was neither ruthless nor aggressive. I was quite submissive and passive and acted like a fan.”