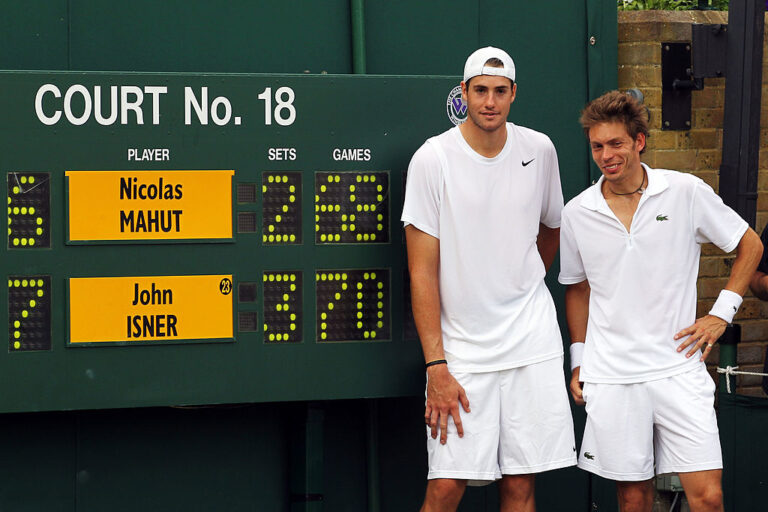 It is 12 years since John Isner and Nicolas Mahut took part in the longest tennis match ever at Wimbledon.

Isner, the 23rd seed in the 2010 event, took on qualifier Mahut in a first-round clash for the ages. The match began on Tuesday, June 22, but would not finish until Thursday, June 24.

The American favourite started the match well, taking the first set 6-4. But Mahut responded, winning the next two sets to put himself in control.

The Frenchman almost took the third set as well, but Isner managed to draw level. With the scores at 2-2, a deciding set was needed. But no tennis fan could anticipate what was to come next.

Play was suspended before the fifth set due to bad light, in what had already been a match spanning two and a half hours.

Both players were forced to return to the court the following day. Play began at 2pm.

In the final set, Isner went 5-4 up, requiring just one more game to seal the victory. But Mahut then managed to level the scores.

As per Grand Slam rules at the time, in the event of a 5-5 scoreline in a set, one player would need to win by two clear games to win the set.

As a result of what was to come in this match, the rules were subsequently changed, so that if scores reached 12-12, it would go down to a deciding game, or tiebreaker. But that wasn’t the case when Isner faced Mahut.

Isner had four opportunities to win the game on the second day of play. The first of these came when he was leading 10-9, and had one match point. However, Mahut managed to draw proceedings back level.

After two more opportunities, Isner again spurned an opening with the scores at a remarkable 59-58 to the American. It is worth mentioning that, at 47-47, the electronic scoreboard failed as it had not been programmed to record scores beyond that number.

Play was then halted for a second consecutive day due to bad light, and incredibly, the match still hadn’t finished.

Isner and Mahut returned the following morning. Finally, after a remarkable 11 hours and five minutes of play, Isner won the 138th game of the fifth set to record an astonishing 6-4, 3-6, 6-7, 7-6, 70-68 victory. It was the longest match in Wimbledon – and professional tennis – history.

Mahut served a ridiculous 70 times just to keep himself in the match, but it ended up being in vain.

What happened after the longest tennis match ever?

Isner progressed to the second round of Wimbledon 2010, where he took on Thiemo de Bakker. Perhaps unsurprisingly, the American lost in straight sets.

Speaking after his first-round marathon, Isner said: “Nothing like this will ever happen again, ever.” And he is correct – barring another rule change, we will never see the like again.

The American has featured in every Wimbledon that has taken place since 2010, reaching the semi-final in 2018. In that year, he took on Kevin Anderson in the semi-final. And whilst, at six hours and 36 minutes, it wasn’t quite in the Mahut category, the two players contested a set which spanned 50 games.

Mahut, meanwhile, went on to predominantly achieve doubles success in his tennis career.

However, the Frenchman did reach the fourth round in the Wimbledon men’s singles tournament in 2016. He lost in straight sets to Sam Querrey. Mahut has not qualified for this year’s men’s singles event. Isner, meanwhile, takes on Andy Murray in the second round.