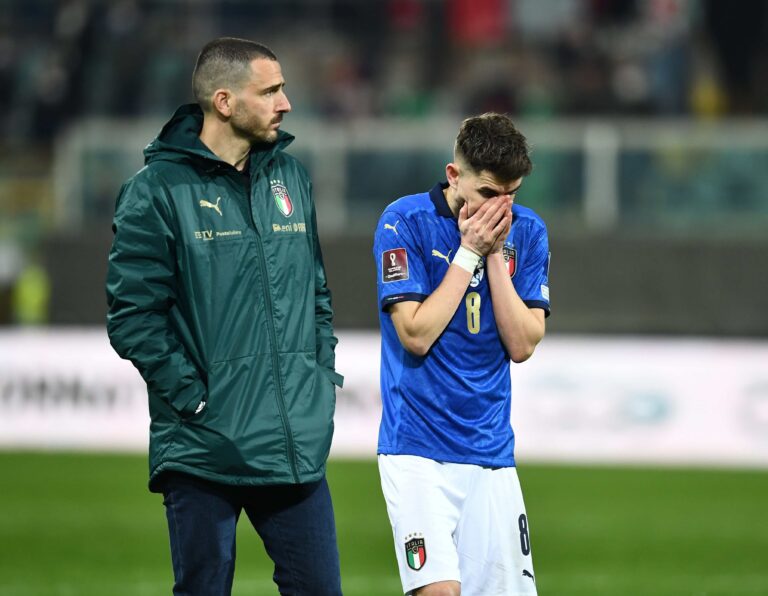 Chelsea midfielder Jorginho has admitted that Italy’s failure to qualify for the 2022 World Cup will “haunt me for the rest of my life” after they were defeated 1-0 by North Macedonia.

In what was a winner-take-all game to progress to the play-off finals, the Italians were looking to continue on the path to their World Cup since 2014. They failed to qualify for the 2018 edition in Russia.

However, as reigning European champions, many expected them to have a safe passage through to the finals.

But their opponents, North Macedonia, have been steadily rising up the footballing ranks in recent years. They qualified for Euro 2020 – their first appearance at a European Championships. Although they ultimately failed to pick up a point in the group stage, even getting to the tournament was a sign of progress.

Earlier last year, in March, they defeated Germany 2-1 in World Cup qualifying. It was a result that effectively ensured they would progress to the playoffs. They finished the group in second place, one point ahead of Romania.

On Thursday night, they produced the most significant result in their history. Ex-Palermo striker Aleksandar Trajkovski scored the only goal of the game. North Macedonia were jubilant. Italy players, meanwhile, will now have to sit at home for a second consecutive World Cup.

Italy failed to lose a group game during World Cup qualifying. However, they drew four of their eight games. That meant they finished second behind Switzerland, who qualified automatically.

They drew against Northern Ireland, Bulgaria and twice against Switzerland. Had they won either of the games against the Swiss, Roberto Mancini‘s side would have gone through automatically.

Following their devastating failure to qualify for the World Cup, fans and pundits cast their minds back to pivotal moments in Italy’s campaign.

Jorginho had opportunities to score for Italy from the penalty spot in both games. However, he missed each penalty. One of the spot-kicks was in the 90th minute. But he blazed the ball over the bar on that occasion.

Speaking to RAI Sport after the defeat to North Macedonia, Jorginho gave an emotional verdict on his misses.

“Stepping up there twice and not being able to help your team and your country is something that I will carry with me forever, and it weighs on me.”

The Chelsea midfielder also admitted his anger that he and Italy could not progress to the World Cup.

“It is difficult to explain what happened,” he began.

“It hurts so much. I’ll be honest. I am still incredulous. I don’t think we lacked creativity, as we always dominated matches and created so many chances. Unfortunately, we were unable to finish them off.

“We played good football, we won the European Championship last summer, but unfortunately in the last few games, we made small errors and were unable to recover from them.”