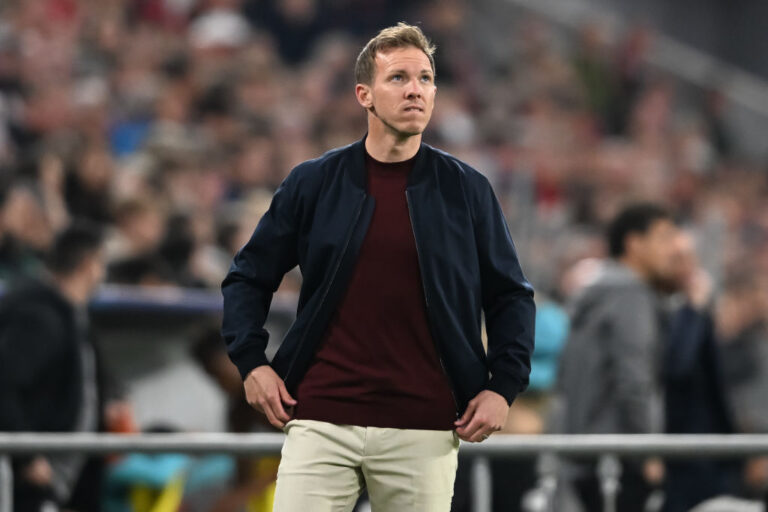 In the aftermath of Bayern Munich‘s Champions League exit to Villareal, Julian Nagelsmann has revealed he received ‘450 death threats’ on social media.

On Wednesday, the German giants crashed out of Europe on aggregate against the ‘Yellow Submarine’.

Bayern’s backs were well and truly up against the wall following a first-leg defeat. But they arrived at the Allianz Arena with fire in their belly. Robert Lewandowski found the opener to give his side the lead. But with just two minutes left in the fixture, they fell apart.

The Spaniards put together a dangerous counter-attack, which left their opponents wide open. Gerard Moreno spotted Samuel Chukwueze in the centre of the box and delivered a beautiful through ball to his teammate. The Nigerian international smashed it into the back of the net. The goal left the home fans stunned and the away contingent in raptures.

Nagelsmann expected his squad to win the tie over Villarreal by producing a strong first leg performance. However, it didn’t work out like that.

As per ESPN, he said: “I think their coach, who I don’t know personally, showed a lack of respect towards Villarreal and towards football by saying that he wanted to kill the tie in the opening leg. For us, that was a lack of respect, and I think in the end, when you spit up at times, it comes down and hits you.”

Although Bayern are en route to their tenth consecutive Bundesliga title, their season hasn’t gone entirely their own way. A shock exit from the German Cup – a 5-0 hammering against Moenchengladbach – and their recent European exit have both left supporters underwhelmed.

This has put pressure on their head coach, who was only appointed last summer. But regardless of his team’s showings, there’s no excuse for the horrific comments that people have made towards him.

There’s nothing in the world that captivates the general public like football. Fans fall in love with the teams they support and the players who provide them with memories that will last a lifetime. However, sometimes they forget that the sport isn’t the be-all and end-all of everything.

Granted, the beautiful game has its moments of frustration. But there’s never an excuse to threaten someone’s life. But after losing a football match, Julian Nagelsmann opened his phone to over 450 of these kinds of messages.

He addressed the incident in a press conference: “I know I will always get criticism from all sides – that’s normal and I can deal with it. But with 450 death threats on Instagram, it’s not so easy. If people want to kill me, that’s one thing, but they also attack my own mother, who doesn’t even care about football.

“I don’t understand it. As soon as they turn off the TV, people forget all decency. And they think they are the ones in the right. That’s the crazy thing.”