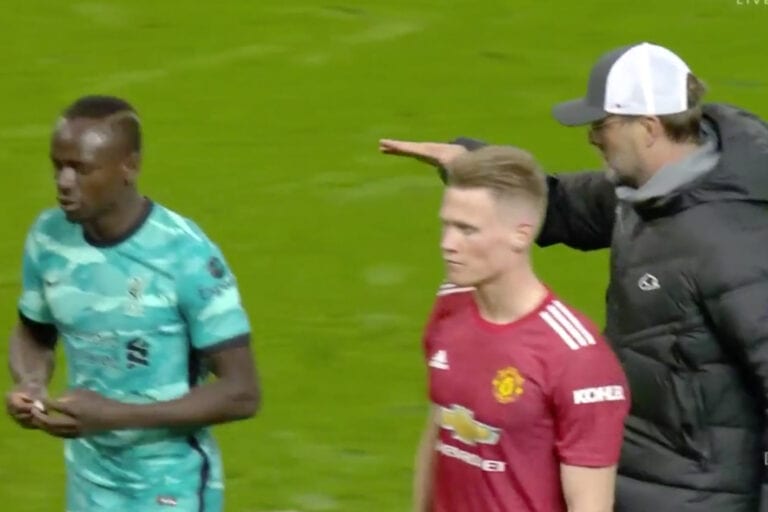 Jurgen Klopp said that there is “no problem” when questioned about Sadio Mane’s decision not to shake his hand after Liverpool‘s 4-2 victory over Manchester United last night.

The win keeps Liverpool’s hopes of qualifying for the Champions League very much alive.

If they win their last three games, only goal difference – Liverpool’s is currently higher than Leicester & Chelsea above them – could prevent them from finishing the season in the top four spots.

Klopp’s side got off to a difficult start at Old Trafford, however, with Bruno Fernandes putting them ahead with the aid of a Nathaniel Phillips deflection on 14 minutes.

But Liverpool equalised through Diogo Jota, and Roberto Firmino put them ahead just before half-time.

Firmino then scored again early in the second half after Dean Henderson fumbled Trent Alexander-Arnold’s shot.

Marcus Rashford pulled one back for United, but Mohamed Salah broke clear late on for Liverpool and slotted the ball beyond Henderson to give the Reds victory.

Mane was brought off the bench for the last 15 minutes, having been replaced in the starting XI at Old Trafford by Roberto Firmino.

He was then seen refusing to shake Klopp’s hand after the game had finished.

When questioned about the incident, the Liverpool manager confirmed there is “no problem” with Mane.

He explained: “No, there’s no problem.

“I mean, yesterday I made a late decision in training to decide for Diogo.

“The boys are used to me explaining things usually but there was actually no time for that and that’s all. It’s all fine.”

Klopp said that there were “only good performances” in Liverpool’s victory and reserved praise for centre-backs Nathaniel Phillips and Rhys Williams.

Phillips inadvertently deflected Bruno Fernandes’s shot into the net for United’s opener, but later assisted Jota’s first half opener and then produced a goal-line clearance to deny Mason Greenwood with the scores at 3-2.

Klopp said: “Our first win at Old Trafford since I’m at Liverpool and good timing, I would say.

“We needed it, obviously. I fought hard for it and we deserved it.

“There were only good performances to be honest.

“You saw that our two centre-halves were shaking a little bit at the beginning, you could see it with their passing, but from the moment when they were in the game, when they forgot everything around them, they played really well.”