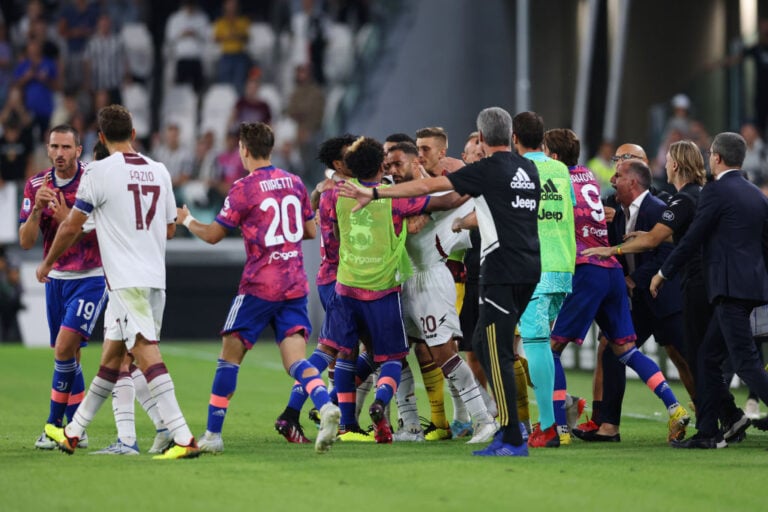 Juventus and Salernitana competed in a pulsating Serie A match last night, which finished with 12 minutes of chaotic injury time.

Playing at the Allianz Stadium in Turin, it was the visitors that actually managed to take the lead. A fizzing cross from Pasquale Mazzocchi reached Antonio Candreva, who bundled the ball home at the back post.

The away side then doubled their advantage during first-half injury time. Juve defender Bremer blocked a Krzysztof Piatek shot with his hand, prompting a penalty. The Polish striker coolly slotted the spot kick home, giving Salernitana a 2-0 half-time lead.

Following a poor first half, Juventus came out for the second with much more intent. They thus managed to get back into the game just minutes after the break. A great Filip Kostic cross found Bremer, who avenged his conceded penalty with a thumping header.

However, Salernitana held firm, frustrating Juventus as they searched for an equaliser. In injury time, though, the game transpired into absolute chaos.

Juventus and Salernitana in injury-time madness

As the clock ticked down, Juventus won a penalty following a trip on Alex Sandro. Captain Leonardo Bonucci stepped up, only to see his penalty saved. But Bonucci reacted quickest, firing home the rebound to make it 2-2.

In the dying embers of the match, Juventus had a corner which Arkadiusz Milik headed home. Thinking he had scored the winner, the substitute ripped off his shirt during wild Juve celebrations.

Because it was his second yellow card offence, Milik received a red card for his actions. But this was the least of the home side’s concerns.

When the two teams finally lined up to restart the match, referee Matteo Marcenaro asked for a pause so he could consult VAR.

This prompted furious reactions from Juventus, which caused Salernitana to clash with the Juve players and staff. A mass shoving match broke out on the sidelines and spilled out onto the pitch.

After three minutes of breaking up the fracas, Marcenaro finally got to the VAR replay screen. Following a brief consultation, he controversially disallowed Juve’s match winner.

Officials judged Bonucci as offside, despite him not even touching the ball. As he actively tried to flick on Milik’s goal-bound header, the Italian was considered off.

Most curiously, though, alternative angles hinted that Antonio Candreva may have played Bonucci onside. But, somehow, he was out of the VAR camera shot.

With Juventus still seething, the game finally restarted briefly before the ref brought an end to the madness. Full-time: Juventus two, Salernitana two.

“I didn’t speak with the referee,” said Allegri, via Tuttosport. “And the referees must be left alone because the stars are the players. But, on the disallowed goal, I am only sorry there are no images showing Candreva, who I think was by the corner flag.”

The draw sees The Old Lady lose further ground on the top of the table, currently lying eighth in Serie A. Meanwhile, Salernitana are just two spots behind them in 10th.