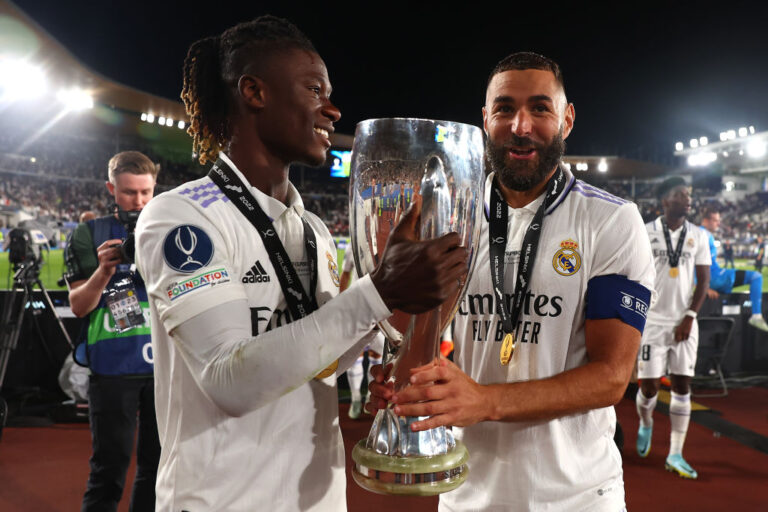 Carlo Ancelotti‘s side were major favourites to defeat last season’s Europa League winners in the showpiece event. And they proved those odds to be absolutely correct, easing to a 2-0 victory in Helsinki, Finland. In the process, they won their fifth Super Cup crown.

Real only had six shots on target over the 90 minutes, but made them count. David Alaba opened the scoring on 37 minutes, tapping in from Casemiro’s header across goal.

Benzema then got his customary goal on 65 minutes. His first-time effort from Vinicius Junior‘s pass squeezed past the goalkeeper, who will probably be disappointed that he let it in.

Real, therefore, kick off the 2022/23 season in the same way as they ended the last campaign – with a trophy.

For Benzema, he has taken his goal tally since August 2021 to an incredible 45, in just 47 games. There may well not be a more likely candidate for this year’s Ballon d’Or.

As well as extending his incredible 12-month goal tally, the Frenchman set an incredible club record.

With his 324th goal for the club, Cristiano Ronaldo is now the only individual to score more goals for Real Madrid than Benzema in the club’s entire history. The striker was tied with Real legend Raul before the match began.

Ronaldo, meanwhile, has 450 goals for the Spanish giants in all competitions. At 34 years of age, Benzema will likely run out of time to break that particular statistic – but the Frenchman seemingly isn’t slowing down any time soon. If he can keep his incredible goalscoring form up for the next three seasons, he will certainly be in contention.

Speaking after the Super Cup triumph, Carlo Ancelotti said of Benzema (quotes via Mundo Deportivo): “He is a very important player, a leader of the team. We are here on our own merit and on his, he has scored a lot of goals.

“He finished the season, and he has started it well. Nobody has any doubt that he should be the Ballon d’Or [winner]. I think nobody doubts it. But in football, anything can happen.”