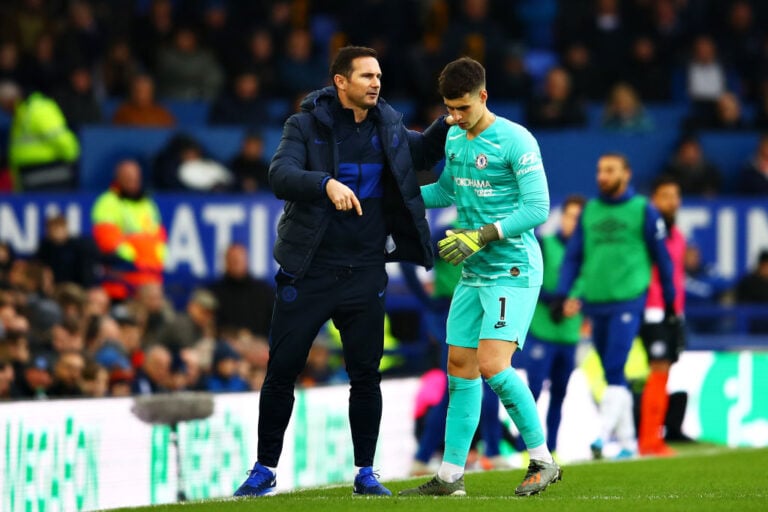 Since moving to the Blues for a world-record £71 million in 2018, Kepa has struggled for consistency in between the sticks. The high price tag put a lot of pressure on his shoulders which impacted his form.

Additionally, a controversial incident in the 2019 Carabao Cup Final tarnished his first season. Despite appearing injured, the keeper refused to be substituted, prompting then-manager Maurizio Sarri to react furiously. To make matters worse, Chelsea then lost the final on penalties.

Frank Lampard’s arrival as manager did little to help Kepa. After a tricky 2019/20 season for the Spaniard, Lampard signed Edouard Mendy from Rennes. The Senegal international became Chelsea’s new number one – demoting Kepa to backup status as a result.

Unfortunately, for the Spaniard, his position as second-fiddle to Mendy remained even after the Englishman’s dismissal. New manager Thomas Tuchel stuck with Mendy as first-choice.

Now, in a new interview, Kepa has given his thoughts on his last two managers.

Looking ahead to the next season, Kepa said: “ I have enthusiasm, ambition, desire to start, to enjoy and, above all, to play more. To be in more matches on the field of play.”

Interestingly, Kepa then spoke about the changes to his game from under Frank Lampard to Thomas Tuchel. Whilst doing so, he criticised the Englishman’s tactics.

“We came from a not so elaborate game [with Lampard], where we didn’t have to take the ball from the back. It was a less planned game, more to the free expression of the player, back and forth, and less control.

“With Tuchel, we have returned to control,” the goalkeeper continued. “It is true that in the Premier [League] we were not close to the top two, but in the other tournaments, we have been very competitive.

“Our goalkeeper participates a lot in the game. He has to be alert and know where to press. He [Tuchel] makes you have to make more decisions and be a very important part of the team’s output.”

It seems that Kepa was not a fan of Frank Lampard during his time as Chelsea manager. In contrast, the Spaniard has a solid rapport with his current boss.

Thoughts on Tuchel and future plans

Arrizabalaga was full of praise for Tuchel’s management of his tricky situation.

“Conversation with him [Tuchel] is easy, on a day-to-day basis he is totally accessible to the players. With me, personally, I notice the love and trust he has in me.

“Obviously, I want to play more. It is true that he is choosing another teammate [Edouard Mendy] and that is what I try to change in my day to day. I want to play, and for that I train and prepare myself.”

Despite the obvious hunger for more minutes, Kepa is not forcing his way out of Stamford Bridge.

“I am not desperate,” he confirmed. “In the end, I’m at a great club. I will talk to the coach, and we’ll decide, but with the clear message that I want to play more.”