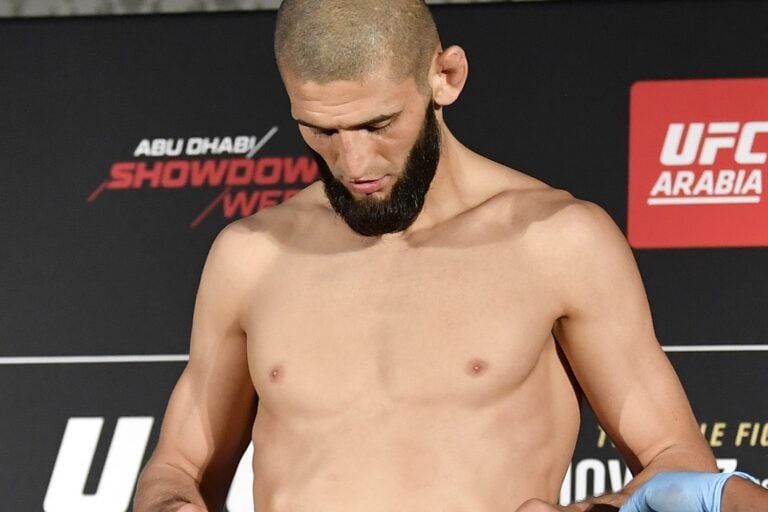 Khamzat Chimaev caused some controversy on Friday after initially missing weight for his welterweight bout at UFC 267.

While there may be two fascinating title fights on tomorrow night’s PPV card, one of the most highly anticipated showdowns throughout the week has been Khamzat Chimaev vs Li Jingliang. “The Leech” is considered to be one of the most underrated strikers in the 170-pound division whereas Chimaev, as many people know, has been tipped to become one of the UFC’s biggest stars in the next few years.

Alas, the dream of seeing them collide almost came crumbling down on Friday when Chimaev hit the scales at 171.5 pounds – half a pound over the welterweight limit for non-title fights.

Then, one hour later, he just about managed to make 171, but it didn’t come without controversy.

Khamzat Chimaev has initially missed weight for #UFC267 in Abu Dhabi. He'll be back in an hour to retry. pic.twitter.com/wRqTFazPc2

TOWELGATE II? Controversy in Abu Dhabi after Khamzat Chimaev fluctuates five pounds during his second weigh-in. Did he hold the towel? pic.twitter.com/UNu8fZCu9E

When Chimaev returned to the weigh-in scales he was clearly suffering the consequences of the cut and it didn’t help matters that the scales themselves were having some issues. Then, when his second attempt was made, “Borz” hit his mark – but some have wondered whether or not he used the towel in front of him to help edge the weight down to 171.

This is a “tactic” we’ve seen utilised before on a few occasions, most notably when Daniel Cormier held a towel when making weight way back at UFC 210.

Regardless of whether you think Chimaev held the towel or was trying to gain an advantage, he didn’t look great up there and a poor weight cut traditionally doesn’t lead to peak performances inside the octagon.

One thing is for sure; Li Jingliang will be licking his lips after seeing this all go down.