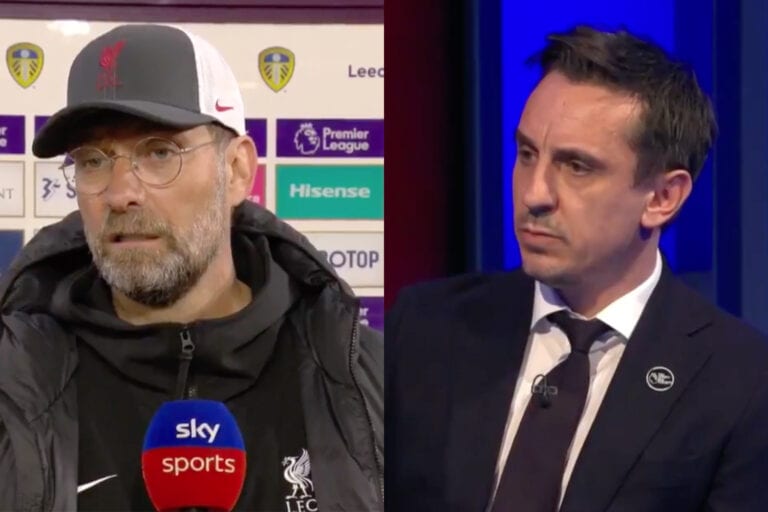 As we all expected, last night’s game between Liverpool and Leeds was largely overshadowed by the fallout from the European Super League announcement.

Gary Neville has been one of the most vocal high-profile opposers to the idea, describing it as a ‘criminal act against football fans’ and making his disgust towards the clubs involved clear.

Criticism of Liverpool’s anthem ‘You’ll Never Walk Alone’ was something that Klopp had taken issue with. Neville had singled out both Manchester United and Liverpool in particular for criticism, citing the working class legacies of both clubs and how the sentiment of the song was completely contradicted by the club’s decision to join the Super League.

However, speaking after his side’s 1-1 draw, Klopp hit back at those comments.

“Gary Neville talks about ‘You’ll Never Walk Alone’, that at least should already be forbidden, to be honest,” the Liverpool boss told Sky Sports.

“We have a lot of rights to sing that anthem; that is our anthem, not his anthem, he really doesn’t understand this anyway.

“So I really don’t want these things because it is not fair. I understand all the talks around, and I don’t like it as well, but I don’t talk now about other clubs like this when you can be emotional.”

? "I wish Gary Neville would be in a hot seat somewhere."

Jurgen Klopp was not happy with Gary Neville's comments made about Liverpool surrounding the 'European Super League' pic.twitter.com/rSdoLjHxQP

“So don’t forget, that we have nothing to do with this. We are in the same situation like you are, we got the information and we have still to play football.”

His comments prompted a bemused response from Neville, who asked why he was ‘living in Klopp’s head’ and pointed out that they were actually on the same side in the debate.

“Why is it not fair? I mean, I have handed out enough insults to Liverpool over the years,” Neville explained

“Yesterday was nothing to do with insulting Liverpool. I don’t know why I’m living in his head, to be honest with you.

“I don’t know what has spiked him. Yesterday was an impassioned plea from me about football and protecting football in this country and my biggest disappointment with Liverpool and Manchester United.

“I think I have equally distributed enough criticism to both clubs in the past 24 hours, so I don’t know what his problem is.

“I had a 25-year career at Manchester United, I’ve had an 11-year career at Sky and I worked hard for that. I’ve not been handed it, I’ve not gone where the most money is.

“I didn’t have choices; Sir Alex Ferguson didn’t say, ‘Gary do you want to stay here?’ every year.”

? "Why is it not fair? Yesterday was nothing to do with insulting Liverpool. I don't know why I'm living in his head."

Gary Neville gives a response to Jurgen Klopp's post-match interview about him pic.twitter.com/EAkDDsinUu

“So I don’t know what he is going on about. I employ 600 hundred people in a city, tried to look after them in a pandemic, is that not a hot enough seat for him?

“He’s done a great job at Liverpool, I’ve got no problem with Jurgen Klopp and I loved his team. But, the fact of the matter is, he is spiky.

“He has been let down by his owners, his owners have thrown him under the bus. We are on the same page.

“But the fact of the matter is, he can’t say what he wants to say and I can, and I accept that.

“The Jurgen Klopp that we know, he hates every little single thing about this – more than I do – because it goes against everything in his life that he has believed in and he has been let down.

“He has been let down by his owners and so have those players at Liverpool.”