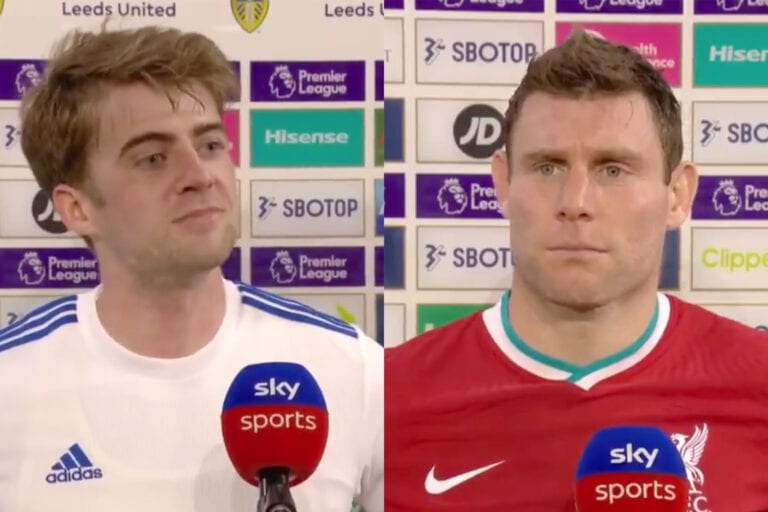 James Milner and Patrick Bamford were both widely praised following Liverpool and Leeds’ 1-1 draw last night, after they were asked for their opinions on the European Super League.

As anticipated, build-up to the game focused largely on the developing news that six Premier League clubs, Liverpool included, had declared their intent to join the breakaway competition.

Before the game, Leeds warmed up in T-shirts protesting the Super League, and Jurgen Klopp was left unhappy that the shirts had been left in the Liverpool changing room before the game. Prior to kick-off, the manager stood by his opposition to the proposal, doubling down on the views he expressed back in 2019.

Liverpool’s captain, James Milner, also spoke about the controversy after the game, making his feelings clear.

“For us, we just try to concentrate on the game. Obviously there’s a lot going on,” Milner said on Sky Sports.

“We have to just try to be professional and concentrate on the game because it’s the only thing we can control.”

Milner continued: “There are a lot of questions and I can only say my personal opinion and I don’t like it. Hopefully it doesn’t happen.

“Probably for the same reasons that everybody has been talking about for the past day. It’s been difficult for us trying to prepare for the game but I can only imagine what’s been said about it and I probably agree with most of it.

“The players obviously have no say so the welcome we got to the ground tonight felt a bit unjust because we’re here to play football and have no control over it. For us, we just have to get on the field and try to finish the season strong.”

Boos and chants of ‘scum’ as the #LFC team coach arrives at Elland Road pic.twitter.com/3O4txDdCVy

When Bamford was asked about the situation, he pointed out how disappointing it had been seeing the uproar surrounding the announcement in comparison to the lack of action of continued racist incidents in the game.

“We’ve just seen what pretty much everyone else has, on Twitter, and stuff. It’s amazing the things they’re talking about; I can’t quite comprehend,” Bamford explained.

“It’s amazing the amount of uproar that comes into the game when somebody’s pockets are being hurt.

“It’s a shame that doesn’t happen with all the stuff that goes wrong, at the minute. Racism and stuff like that. It’s just the way it is, at the moment.”

The striker did go on to say that like most fans, he didn’t agree with the Super League concept.

"I haven't seen one football fan who is happy about the decision and football is ultimately for the fans."

“It is something we talk about,but once you get on the pitch, you’re not thinking about stuff happening outside the ground. We’re like fans, really. We’re like everyone else – can’t believe it and talking about what’s going to happen. In shock,” Bamford explained.

“From me, personally, and from what I’ve seen on Twitter – I haven’t seen one football fan that’s happy about the decision. And football, ultimately, is about the fans.

“Without the fans, every single club with be pretty much nothing. It’s important that we show football is for the fans and try to keep things that way.”

Patrick Bamford reveals what it’s like playing under Marcelo Bielsa

Which key figures have stepped down following Super League collapse?

Patrick Bamford reveals what it’s like playing under Marcelo Bielsa

Which key figures have stepped down following Super League collapse?