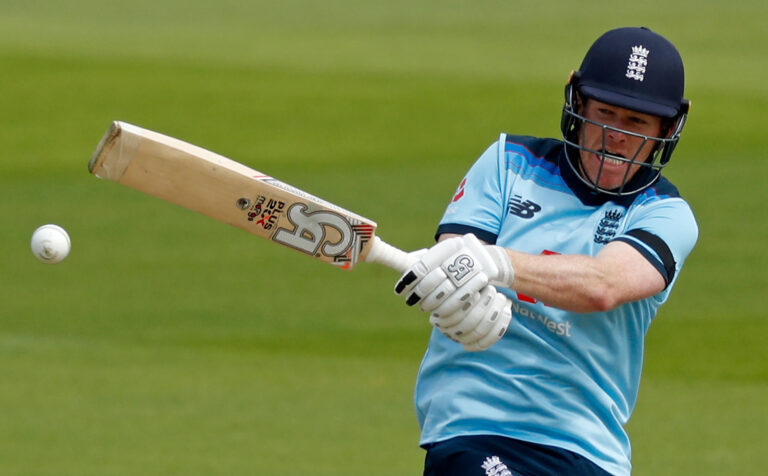 Kolkata Knight Riders successfully chased down 136 runs to beat Delhi Capitals in the semi-final of the 2021 Indian Premier League, despite losing six wickets for seven runs towards the end of their innings.

Kolkata, captained by England T20 skipper Eoin Morgan, looked well on their way to victory in the 16th over.

But then things began to collapse. Gill departed, as did number three batter Nitesh Rana.

The man at the centre of much of what happened next, as he so usually is in pressure situations, was Delhi Capitals’ Ravichandran Ashwin.

After not playing a single game during India’s recent Test series of England, Ashwin is back doing what he does best – spin bowling.

He strode in to bowl the final over of 20 with it all on the line. KKR needed seven runs to make the final of the IPL. DC needed to restrict them.

The previous two overs had gone for just four runs. South African pair Kagiso Rabada and Anrich Nortje had taken a wicket each – both clean bowled.

Morgan was Nortje’s victim. He chopped on to his stumps whilst still on 0. The 35-year-old has had a poor tournament with the bat – recording a high score of just 13 from eight innings since the IPL resumed last month – but his captaincy played a vital role in KKR getting to this stage.

Ashwin’s first delivery was nudged for one, placing Shakib Al Hasan – once the world number one all-rounder – at the crease with five balls to go.

The Bangladesh star couldn’t get his first ball away. His second ball saw him trapped lbw, with the umpire given no choice but to give him out. Six runs from three balls required – and another wicket down.

Then came West Indies pinch-hitter Sunil Narine. His first ball saw him miscue and hit Ashwin’s delivery straight up into the air and into the safe hands of Axar Patel. Six needed from two.

It was all set for a dramatic finish, but the set batter Rahul Tripathi tore up the script. Facing the hat-trick ball, he smashed it back over Ashwin’s head and into the stands. Job done.

The win – which KKR secured by three wickets – probably should have been sealed far earlier, but England skipper Morgan now has the opportunity to lift a prestigious IPL title before the T20 World Cup begins later this month.

KKR will face Chennai Super Kings in the showpiece event, which is to take place this Friday. The latter boasts the talent of the likes of England’s Moeen Ali, South Africa’s Faf du Plessis and Indian legends MS Dhoni and Suresh Raina.

Morgan said after the thrilling climax (quotes via Sportskeeda): “We’re in the final and we’re delighted to get over the line. We would’ve loved to win convincingly but Capitals are a very good side.”

“Six off two, the odds were probably in the favour of the bowling side, but Rahul Tripathi has done superbly well for us.”

The 2021 IPL final is scheduled to take place in Dubai this Friday at 3pm UK time. It will be broadcast live on Sky Sports Main Event and Sky Sports Cricket in the UK.