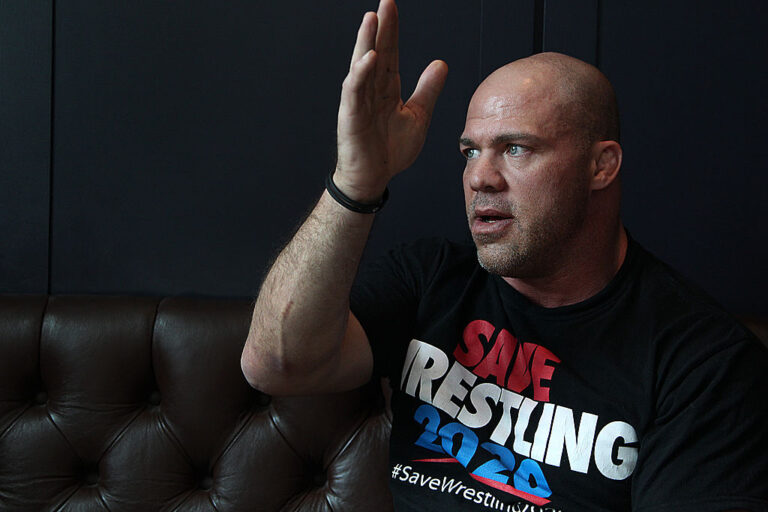 Former WWE wrestler Kurt Angle publicly voiced his disdain for the worst storyline of his career, which he believes was a twisted joke made by then-Chairman and CEO Vince McMahon.

Kurt Angle is widely recognised as one of the biggest stars in wrestling history. His ‘ankle lock’ move is iconic. Angle is a household name in the sport, and as a result, he is a member of the WWE Hall of Fame.

Back in 2005, the wrestler played the role of a sexual deviant in one of the most shocking WWE storylines ever. Booker T and Sharmell were a loved-up couple, and Angle, who was pursuing his sexual desires, stalked Sharmell.

This angle was used in order to set up a series of bouts between Angle and Booker T, and the in-ring and backstage action got more outlandish the longer it went on.

Angle even left a match with Booker T early in order to go and harass Sharmell. The rivalry eventually ended when Booker T defeated Angle, but this is a storyline that the WWE will not look back upon fondly.

Angle reveals his dislike for the storyline

Speaking on his podcast The Kurt Angle Show in November 2021, the former WWE star expressed his disdain for the storyline and the role he had to play.

In his view, Vince McMahon had dreamt up the idea and ran with it.

He said: “I have no idea where the idea came from. Vince is kind of a ribber. He’ll do stuff to mess with you a little bit and shove it in your face. I think that he thought I had this fetish for black women. I like all women, white, black, Hispanic, it doesn’t matter. My wife is half Hispanic and half Italian.

“I think Vince thought I had this fetish for black women, and he thought it would be a funny program. I was not comfortable by any means. I had so much respect for Booker T and Sharmell. To do that and pretend I was stalking his wife, it was the worst angle I have ever done. It was the worst storyline I’ve ever done. I did it anyway because I’ve always been a team player, but I was not comfortable doing it.”