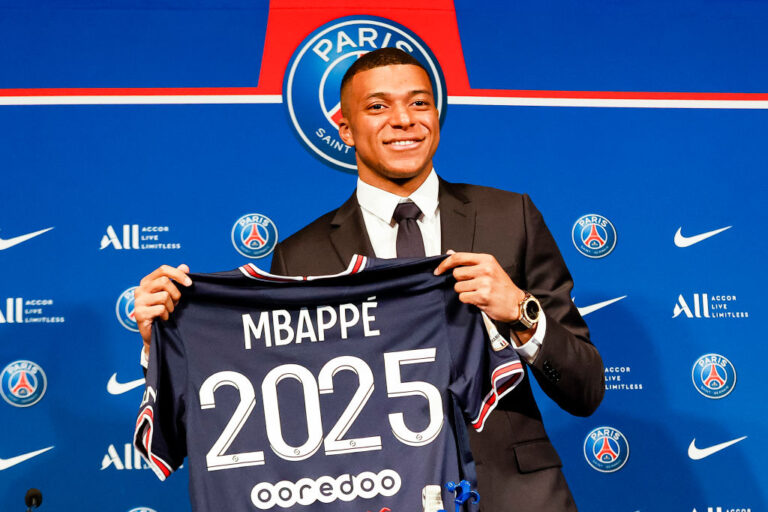 With his massive recent wage increase from his new contract, PSG’s Kylian Mbappe can undoubtedly claim to be one of the richest footballers in the world.

News of his surprising decision to re-sign with Paris Saint-Germain sent shockwaves through the football world. Most thought that the Frenchman would sign with Real Madrid. Surprisingly, he made a last-minute U-turn and renewed his deal at his hometown club.

Upon hearing the news, critics bashed Mbappe for the absolutely extortionate amounts of money offered to him. La Liga even went as far as complaining to UEFA and EU authorities over the move, claiming that it would jeopardise the future of European football.

However, the exact details of Mbappe’s three-year contract were unknown, until Spanish outlet Marca revealed the actual figures.

Amazingly, the rumours were true – Kylian Mbappe will enjoy a genuinely astronomical wage. Marca report that he will earn €50 million a year purely from his PSG deal – meaning he is on just under €1 million per week. In addition, Les Parisiens paid their forward €180 million as a signing bonus for staying in the French capital.

Unbelievably, this does not even factor in money from endorsements or image rights. Alongside club money, Mbappe has a deal with Nike that will pay him €14 million per year until 2029. His sponsorship contract with the American brand also includes bonuses that could secure even more money.

Clubs are throwing crazy money at their stars across football. With that in mind, how does Mbappe’s new fortune stack up with other footballers?

Kylian Mbappe contract: How does his wage compare to others?

At the end of 2021, Forbes released their list of the highest-paid footballers for the calendar year – in US dollars. Top of the list was Portugal’s Cristiano Ronaldo; he earned a combined $125 million from endorsements plus his Juventus and Man United contracts.

As you can never mention one without the other, Lionel Messi was second on Forbes’ list. He also broke the nine-digit figure mark in 2021, raking in $110 million.

Last year, Mbappe ranked fourth on Forbes’ list. For 2022, Kylian Mbappe may be able to compete with the two legends thanks to his new contract. His €50 million deal converts to $53.6 million. If you add his €14 million ($15 million) endorsements, he sits at $65 million. Quite far behind.

But, for 2022, his earnings should include his massive signing bonus of €180 million ($193 million). Therefore, Kylian Mbappe would break the quarter of a billion-dollar mark in just a single year – and potentially take the top spot.

In 2021, Mbappe’s PSG teammate Neymar was the third-highest earning footballer in the world. As well as his massive contract with the French side, Neymar’s lucrative Puma sponsorship nets him £23 million a year, per the Daily Mail.

The other players on the list include Mohamed Salah, Robert Lewandowski, Paul Pogba, and Real Madrid pair Eden Hazard and Gareth Bale. Interestingly, just one star playing outside of Europe makes the list, in seventh.

Now of Japan’s Vissel Kobe, Barcelona legend Andres Iniesta makes the top ten earners list. According to Forbes, his deal with the Japanese side nets him $31 million a year. He also has a well-paying boot deal with Japanese sports brand Mizuno to boost his income.