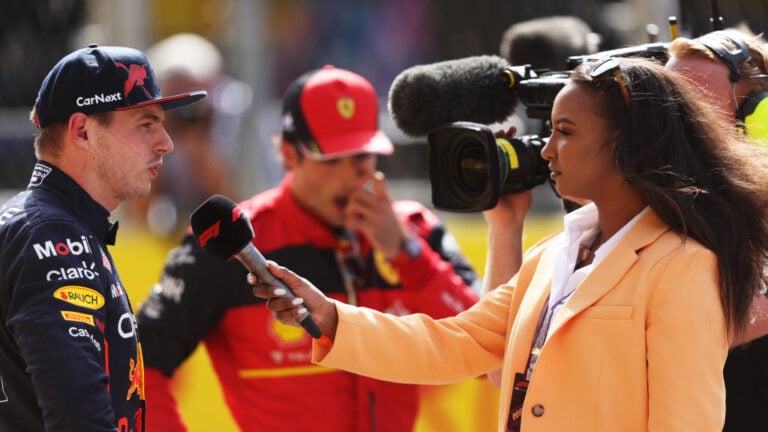 Schiff joined the Sky F1 team before the start of the 2022 season, and was trackside at the season-opening Bahrain Grand Prix.

The 28-year-old is a professional racing driver. She raced in the inaugural W Series season in 2019. She also competed in the 24 Hours of Nurburgring in 2018, finishing second in her class.

Four years earlier, Schiff took part in the 24 Hours of Zolder, also finishing second in her class on that occasion.

She is on Sky F1 punditry duty for this weekend’s Canadian Grand Prix. Earlier this week, however, she was the subject of abuse from an online troll, who decided to question her qualifications for the role.

He tweeted: “Naomi is an ex-professional racing driver and totally qualified to give her opinion as part of the Sky team. She’s been a great asset since joining, and we should welcome more representative broadcasting with open arms.

“Still have a long way to go to change these attitudes in sport.”

In the Canadian Grand Prix drivers’ press conference, Lewis Hamilton followed up on his comments on Naomi Schiff: “I know what it’s like to receive hate online. I encourage her to continue doing what’s she doing because she’s doing a great job.”

Before the Canadian Grand Prix weekend, Max Verstappen and Sebastian Vettel were asked for their responses to the abuse that Schiff received, and on online abuse in general.

Verstappen responded: “Most of the time, the people that are hating on you are frustrated people in life, or work, or whatever.

“They’re at home, you know, on their keyboards. They don’t have the person in front of them, and they can say what they want. And I think that’s not correct.

“Most of the time, if these people meet you in real life, they would not even dare to say these kinds of things.

“Of course, it’s bad. I didn’t read the comments, but I did pick up on some of the lines. It’s not nice. We all receive hate, I receive hate, but do I really care? No. They don’t even deserve the attention, to be honest.

“At the end, ignorance is more painful than actually responding back at them, because that’s what they like. Then, they actually have a bit of a platform. So I never really pay any attention to it.”

Vettel, meanwhile, also supported the Sky F1 pundit: “I only found out after because I’m not active [on social media]. I think it’s a horrible testimony that there are still people out there that… in the end, it must be you’re extremely unhappy with your own life. You’re extremely jealous.

“I think she’s a great woman, very strong woman. She’s beautiful, good-looking, she does a great job. So I understand lots of things to be jealous about. But it doesn’t take any courage to write hate messages like this.

“It is really mean, and it hurts, so it’s absolutely disgusting. Those people should be ashamed of themselves and wonder whether that’s really everything they can do with their lives.”