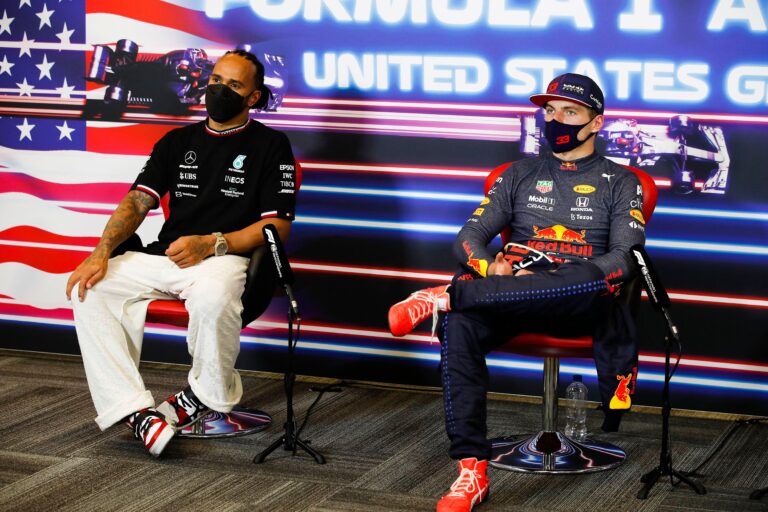 Lewis Hamilton says it will be “tough” to beat Max Verstappen and Red Bull at the next two circuits on the 2021 Formula 1 calendar.

Hamilton finished second behind Verstappen in a thrilling conclusion to the United States Grand Prix on Sunday.

Verstappen led for much of the 56-lap race despite losing the lead at the first corner, but saw Hamilton – on fresher tyres – cut into his lead into the closing laps.

Although the Mercedes driver managed to get the gap under one second at various intervals in the final two laps, he was not able to get close enough to pass.

Verstappen therefore extended his lead in the Drivers’ Championship to 12 points over his Mercedes rival, who gained an extra point for recording the race’s fastest lap. There are five races left in the 2021 season.

Formula 1 next travels to Mexico and Brazil – two locations which many believe will suit Red Bull more than Mercedes.

Speaking after the race, Hamilton said it will be “tough” to defeat the Red Bulls at “at least the next two tracks”.

He explained: “At least the next two tracks for sure, very strong circuits for Red Bull so it’s going to be tough for sure.”

On the race itself, he told Sky Sports F1: “We gave it everything we had and they [Red Bull] were just quicker than us this weekend, for whatever reason. I can’t pinpoint it – it looked like they had better rear end, a little bit less sliding than we had.”

“I gave it absolutely everything today and just unfortunately couldn’t convert it at the end.”

Verstappen, meanwhile, said that he wasn’t sure whether his differing strategy to Mercedes was going to work, and called his victory “incredible”.

He told Sky Sports F1: “Of course we lost out in the start so we had to try and do something else. The tyre wear is quite high around this track, we went aggressive and I was not sure it was going to work but the last few laps were fun. A bit sideways through the high-speed corners but super happy to hang on.”

“It was exciting. The whole race the pressure was on, not knowing how quick Lewis was going to get you. It’s incredible to win here.”

F1 returns on the weekend of November 5-7 with the running of the Mexico City Grand Prix.