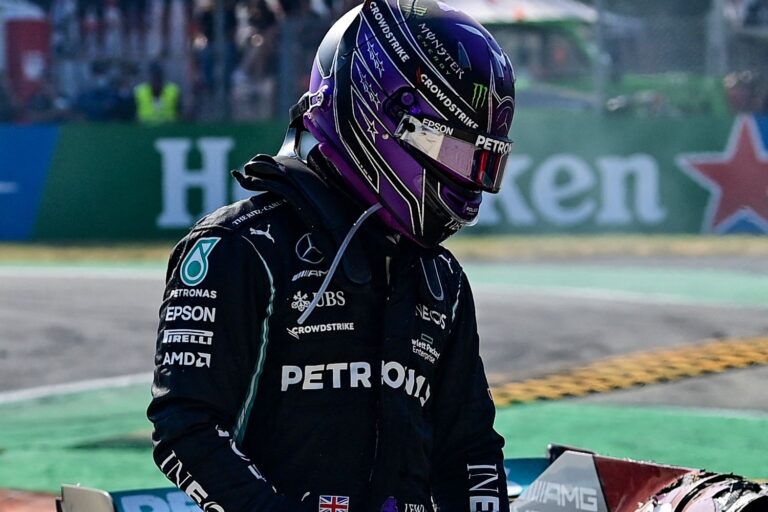 Lewis Hamilton has hit back at Red Bull technical advisor Helmut Marko who accused the Brit of exaggerating the extent of his injuries suffered during a crash with Max Verstappen at the Italian Grand Prix.

It’s no secret that Hamilton and Verstappen aren’t the best of friends with the pair having a series of spats and incidents together both on and off the track. At Monza, they wrote another chapter in their rivalry as Verstappen’s car collided with Hamilton’s – with only the Halo device preventing a potentially serious injury from taking place.

Hamilton went on to receive specialist treatment for his neck but after going on to attend the Met Gala in New York, Marko speculated that Hamilton may not have been as honest as once thought about his health.

In a recent interview, Hamilton shut that idea down and made it clear he didn’t care about what Marko thought had happened.

“I mean I don’t really listen to what these individuals talk about,” Hamilton said. “It’s inevitable that when a car lands on your head, you’re going to have some sort of discomfort.

“I definitely felt a bit of pain I think after the race and then I said I was going to get it checked out and I worked with Angela [Hamilton’s physio] straight after the race and during the flight had checkups the next day and then we just worked on it through the week with acupuncture and everything.

“I didn’t say I was dying. Of course, aware of the fact that in just a millisecond, anything can happen. And so I did feel grateful. It was difficult. It was intense.”