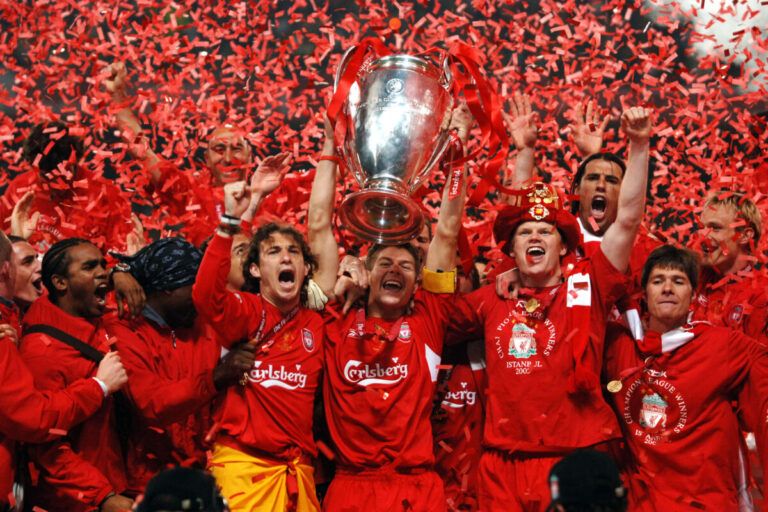 With Liverpool into another Champions League final, we take a look at where the heroes of their 2005 victory in Istanbul are now.

Jurgen Klopp‘s side defeated Villarreal 2-0 in the first leg of their semi-final clash.

After a tough first half, which saw them fail to break down a resilient Villarreal outfit, Liverpool fired out of the blocks after the interval. Two goals in three second-half minutes saw them stretch out an advantage they would not relinquish.

And after a 3-2 victory in Spain in the second leg, they will now be competing in their third Champions League final in five seasons.

Klopp and his team lost the final in 2018 to Real Madrid, before bouncing back with a 2-0 victory over Tottenham Hotspur the following year.

Winning the trophy would emulate the six previous Reds teams that have lifted Europe’s biggest prize. Before the class of 2019, the most recent occasion Liverpool have won the Champions League was back in 2005.

The ‘Miracle of Istanbul’ famously saw the Reds, then managed by Rafael Benitez, come from 3-0 down at half-time against AC Milan to level the scores at 3-3. They were then victorious in a penalty shootout, with Jerzy Dudek making two saves. The Polish stopper also made an incredible double save in extra time that kept Liverpool in the contest.

But how are the players that contested that final in the starting XI getting on now? Let’s take a look:

The shootout hero for Liverpool, Jerzy Dudek retired from football in 2011 after four years with Real Madrid. He did, however, make a one-off appearance for Poland in 2013, collecting his 60th cap.

After his career ended, Dudek swapped football for motor racing. He even competed in the endurance-based 24H Series in Barcelona. The Pole hasn’t yet received a call to compete in Le Mans – but maybe that will happen one day.

He also currently serves as a UEFA ambassador.

In the context of the 2005 Champions League final, Steve Finnan is best remembered for being the player substituted at half-time as Liverpool switched to a 3-5-2 formation.

The Republic of Ireland international left Liverpool in 2008 before ending his career with Portsmouth.

After retirement, Finnan dropped out of football entirely. According to the official Liverpool website, he helps run a property business with his brother as of 2020.

In the context of this piece – and his popularity amongst TV viewers – Jamie Carragher needs no introduction.

Following the conclusion of his career in 2013, the Liverpool legend became a familiar face on our screens as a TV pundit. He regularly appears on Sky Sports, and features on CBS Sports during Champions League nights.

Sami Hyypia spent 10 years with Liverpool before departing the club in 2009. After ending his professional career, he went into management.

The Finland international spent two years with Bayer Leverkusen before enduring a forgettable six-month spell with Brighton, where his side won just six games out of 26.

Hyypia has rarely been seen in the dugout since. He spent a short spell with Swiss side FC Haka in 2020 as assistant manager but left after three months.

One of the true feel-good stories of Liverpool’s Champions League win, Traore had battled relentlessly to regain his place in the Reds side during the 2004/05 season.

He only lasted a further season at Anfield, however. After retiring in 2014 following a stint with MLS outfit Seattle Sounders, he became the assistant manager of their second team.

Traore then stepped up to first-team duties as assistant manager to Brian Schmetzer and departed in 2021.

He is currently the head coach of the Right To Dream International Academy programme, responsible for youngsters in Ghana, Denmark and Egypt.

The scorer of Liverpool’s equalising goal in Istanbul, Xabi Alonso was one of the Premier League’s top midfielders during the opening decade of the new millennium.

He left Liverpool in 2009, following a fallout with Benitez, and moved to Real Madrid before concluding his playing career at Bayern Munich.

The 40-year-old is currently the head coach at Real Sociedad B. He helped the side to promotion to Spain’s second division last season.

Steven Gerrard is currently one of the most recognisable names on this list in terms of current occupations.

The Anfield legend is the manager of Aston Villa, a role he has been in since November. Before that, he had a three-year spell at Rangers. Gerrard helped the Scottish giants to win their first league title in 10 years last season.

The scorer of the memorable ‘ghost goal’ in the 2005 Champions League semi-final against Chelsea, Luis Garcia left Liverpool for Atletico Madrid in 2007.

The 43-year-old retired in 2016 after a brief spell in Australia with Central Coast Mariners.

Like his former team-mate Carragher, Garcia has transitioned into punditry since calling an end to his playing career. The Spaniard has worked for the likes of beiN Sports, ESPN and Sky Sports. He is also a Liverpool club ambassador.

Famous for his incredible long-range free-kicks and tough tackling, John Arne Riise remained a regular fixture in the Premier League for most of the nine years before he departed England for good following a spell with Fulham.

The Norwegian ended his career in playing for SK Rollon in his home country. He now manages Avaldsnes, who play in the top division of women’s football in Norway.

Harry Kewell’s 2005 Champions League final lasted just 12 minutes as he had to be substituted due to injury. The moment was somewhat of a precursor for the rest of his Reds career, as he was regularly dogged by injuries – although he did have some memorable moments.

The Australian international departed Liverpool in 2008. He spent three years at Galatasaray before ending his career in Australia with Melbourne Heart.

Kewell has spent the last four years occupying managerial roles in the EFL. He had stints with Crawley Town, Notts County, Oldham Athletic and Barnet. He was sacked by the latter club in September 2021.

The final member of Liverpool’s starting XI on that famous Istanbul night, Milan Baros departed the Reds in the same year to join Lyon.

He would return to English football in 2008 for a brief loan spell with Portsmouth but failed to score in 12 Premier League appearances.

Baros moved to Galatasaray and spent subsequent spells at five different clubs. The 40-year-old is currently still active as an amateur footballer, and turns out for Czech Republic side FK Vigantice.