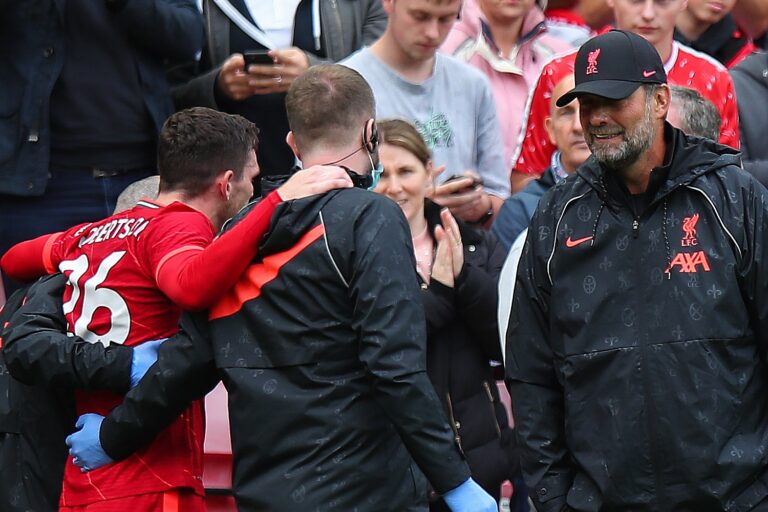 Liverpool supporters are fearing a sense of deja vu in the wake of Andy Robertson’s injury yesterday.

The Reds took part in their penultimate pre-season friendly on Sunday as they played out an entertaining 1-1 draw with Athletic Bilbao. The performance was solid enough from the Reds but in the midst of all the excitement, there was a concerning moment as star full-back Andy Robertson went down with what appeared to be a nasty ankle injury.

The Scottish defender is set to undergo further tests today and while he made it clear that he’s staying positive, he was quite clearly in a significant amount of pain.

As many fans will remember from last season, Jurgen Klopp’s men weren’t exactly very lucky when it came to injury problems in the 2020/21 campaign. From Virgil van Dijk to Joe Gomez and beyond it was an incredibly tough title defence that ended in the club just about scraping their way back into the top four.

Now, in the wake of the Robertson news, some members of the Anfield faithful can’t help but feel as if that grey cloud could still be hanging over the red half of Merseyside.

What's that – a Liverpool defender is injured?

THE PREMIER LEAGUE IS BACK BABY!

How long do we think Robertson will be out for? #LFC

I’m thinking if it’s just a sprain, then maybe 4-6 weeks.

However if it’s ligament damage, then we might not see him again until the end of the year… pic.twitter.com/oEOfKSBV4Z

After a lot of misfortune with injuries last season, Kostas Tsimikas has been one of the stand-out players for Liverpool this pre-season. Great two-way game and creation in the final third, and he will be a very useful backup to Robertson. £11.7m spent wisely by the looks of it.

It’s tough to say whether or not the sheer volume of football Robertson has played in the last twelve months has played a role here, but either way, his absence from the first team squad is going to hit Klopp hard regardless of how long he’s on the shelf for.

The good news here is that Kostas Tsimikas, who will almost certainly replace Robertson during his recovery, has enjoyed a really strong pre-season with the kind of outings that should reassure the masses about what he could produce in the starting XI.

Liverpool’s Greek international will likely feature against Norwich City this Saturday in his side’s Premier League opener at Carrow Road.