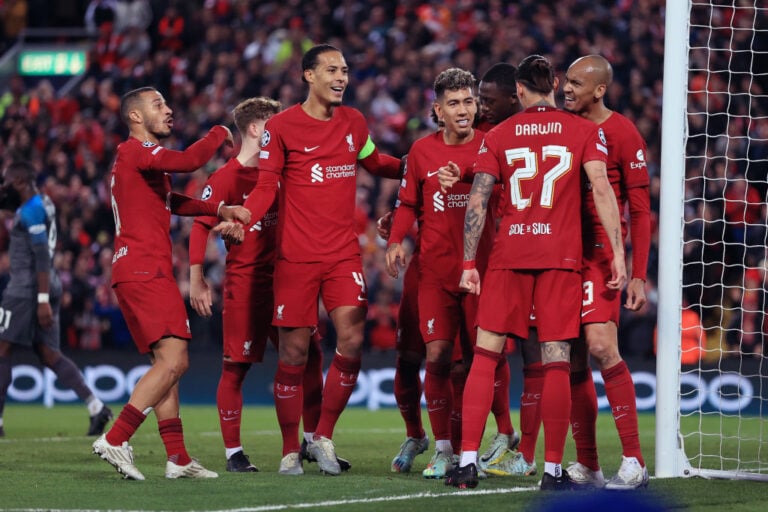 Like many of the top teams around the globe, Liverpool have numerous stars heading to the World Cup – with some who could play a starring role in Qatar.

However, Jurgen Klopp’s side are in quite a bizarre situation. A whole host of their top players will not be playing at the tournament for various reasons.

Most notably, Mo Salah did not qualify for Qatar 2022 with his country, Egypt. The likes of Andy Robertson and Luis Diaz also suffered the same fate with their respective nations.

Meanwhile, Joel Matip will not be in the Cameroon squad after retiring from international football prematurely – in 2015. Diogo Jota suffered an even more heart-breaking event, as he will miss the tournament through injury.

A number of Liverpool stars then may not make their nation’s 26-man squad for the tournament. Players such as Fabinho, Jordan Henderson, and even some players mentioned in the following list may be at risk of missing out on a spot on their country’s plane.

Nevertheless, here are five Liverpool players who – if they make it to the tournament – could stand out in Qatar.

Liverpool’s imposing centre-back will captain the Netherlands at the upcoming showpiece tournament. Interestingly, at 31 years old, Qatar 2022 will be Virgil van Dijk’s first World Cup. This is because Netherlands missed out on Russia 2018.

2022/23 has been a mixed season so far for Van Dijk. While highs such as an outstanding 1-0 win over Man City have occurred, there have been numerous lows, too. For example, the Dutchman lost his unbeaten Premier League record at Anfield in a shock 2-1 loss against Leeds.

But, most importantly, Liverpool’s No.4 has stayed fit. On his day, Van Dijk is undoubtedly one of the best central defenders in world football. As a result, his country will rely on his speed, physicality, and excellent positioning to boost their defence.

Van Dijk will be the leader for a Netherlands side that will be looking to go far in their World Cup return. With a favourable group of Senegal, Ecuador, and hosts Qatar, expect Van Dijk to be a commanding presence in the knockout phases.

Despite having limited game time, Darwin Nunez has proved his ability to score goals in a Liverpool shirt.  In just 750 minutes in all competitions, Nunez has managed seven goals and one assist – a healthy return overall.

But he has drawn criticism on occasion for poor decision making, bad misses, and red cards. For instance, his dismissal vs Crystal Palace raised concern for Liverpool fans over Nunez’s temperament.

When Nunez plays, he is impactful – and the World Cup could be the same. Nunez should be on the plane for Uruguay, plus he should be a starter for the South Americans.

Unfortunately, he missed the 2021 Copa America due to having knee surgery. However, the 23-year-old featured in four of Uruguay’s last five matches. Nunez also scored in his country’s 2-0 victory over Canada, too – their last match before the World Cup.

Provided that he starts for Uruguay, Darwin Nunez could prove a dangerous prospect for opposing defenders to handle in Qatar.

Alisson faces stiff competition for Brazil’s starting GK spot from Man City’s Ederson. If he gets the nod, though, it will definitely be on merit.

Although Liverpool have had a difficult season defensively, this should not factor on Alisson’s minutes at the World Cup. Domestically, the Brazilian has made 39 saves for Liverpool, and kept 4 clean sheets so far. To add to this, the Reds No.1 has kept three clean sheets in the Champions League.

Alisson has also made crucial saves to rescue his side on multiple occasions.

Regardless of his quality this year, who starts between the sticks is anybody’s guess when it comes to Brazil. Alisson started just twice at the 2021 Copa America but started seven of Brazil’s last 11 World Cup qualifiers.

Many experts tip Brazil to go far in Qatar, if not win it. Should Alisson be their keeper, expect him to be in many people’s teams of the tournament.

Like his Liverpool teammate, Roberto Firmino could be on the Brazil plane for the World Cup – but there’s a chance he does not make it. With the form that he has had in 2022/23, Firmino should go.

The versatile forward has been in excellent form this season. Domestically, Firmino has six goals and three assists from eleven appearances. He also has a goal and assist from the Champions League group stage, too.

A highlight of this was a stunning two goals and three assists in Liverpool’s 9-0 rout of Bournemouth.

His speedy start to the season also saw Firmino return to the national team fold in September. After a 14-month hiatus, Firmino got into the Selecao squad for the last friendlies before the World Cup. However, he did not feature in any of these games.

As a result, his chances of going to Qatar are about 50/50. When he gets on the pitch for Brazil, though, Firmino is a useful option. He has 17 goals in 55 caps for his country, to go with seven assists.

In the event of some unfortunate injuries, Roberto Firmino could have a big impact for a Brazil side expecting success.

After missing out on Gareth Southgate’s squad for the September Nations League matches, many wrote off Trent Alexander-Arnold from going to the World Cup. However, injuries to other options and his undeniable talent mean he could get on the plane.

For example, a number of pundits at The Athletic slate Liverpool’s No.66 to be in the 26-man squad.

Attacking-wise, Alexander-Arnold is definitely one of the best full backs on the planet. He has his limitations defensively – making some mistakes this season – but is certainly a competent defender.

The Liverpool star could therefore be perfect for a wing-back role, should Southgate opt for a back five. With the ability to go forward, plus extra defensive cover, Trent could excel in Qatar if given the chance.

Injuries to Reece James, Kyle Walker, and Ben Chilwell means that the full-back spots are a bit more up for grabs. Currently, Kieran Trippier is the preferred option. But Alexander-Arnold could play for the Three Lions if the manager wants extra forward threat.

He currently has three goals this season, yet bizarrely no assists at this point in time. Don’t let this fool you though; Trent has had 13, seven, and 12 assists in his last three Premier League campaigns respectively.

A player who is accustomed to big games, Alexander-Arnold will certainly be ready if and when England need him.

Liverpool ultimately have a number of brilliant players who may not actually see to much action at the World Cup. But tournaments are always unpredictable; if these stars get the chance, they could really excel at the winter showpiece.