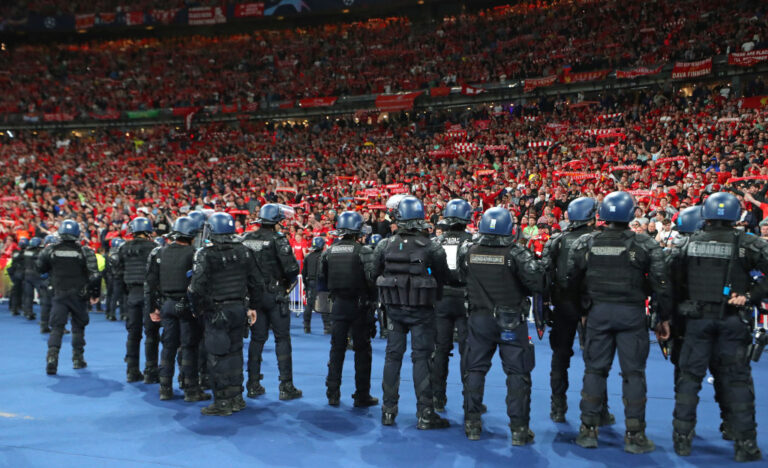 Liverpool Mayor Steve Rotheram has given some strong criticism of UEFA and Aleksander Ceferin for their response to troubles around the Stade de France before and after the Champions League Final.

The final suffered from chaos outside the ground, as a number of incidents caused trouble.

Fans of the Merseyside club struggled to gain access to the Stade de France – with some not getting into the ground until half-time. Outside the stadium, French Police tear-gassed large groups of fans after closed ticket gates caused significant bottlenecks.

Large numbers of fans reported large ‘crushes’, where supporters were unable to move for significant periods of time. Many feared for their safety due to the crushing crowds.

In further terrible scenes, local youths and people without tickets tried to breach security and gain access to the ground. Additionally, pickpockets stole from fans and assaulted those stuck outside the Stade de France. As a result, the final kicked off over half an hour late.

All the disruption outside cast a shadow over UEFA’s showpiece match. Now, different groups are seeking to assign blame for the shocking events.

Disagreement over cause of chaos

France’s interior minister, Gerald Darmanin, pointed blame at Liverpool fans, who he claimed used thousands of fake tickets in order to gain access to the Stade de France. He said that the game had fallen victim to “fraud on an industrial scale”, per Sky News.

However, he also expressed regret at the “errors” and “disorganisation with regards to welcoming the British supporters”.

Both UEFA and the French sports minister echoed Mr. Darmanin’s viewpoint. Additionally, the sports minister said that youths from the Saint-Denis area caused further chaos by trying to get into the match too.

In contrast, Liverpool supporters feel that they were not to blame. Instead, they criticised the French police’s heavy-handed approach and poor organisation, which did little to calm down the crowds that were crushed together. Liverpool released a strong statement on the matter, saying they were “hugely disappointed”.

“Supporters should not have to experience the scenes we have witnessed tonight,” read the statement. “We have officially requested a formal investigation into the causes of these unacceptable issues.”

Now, UEFA have ordered an independent review into the ordeal. However, the Metro Mayor of the Liverpool City Region, Steve Rotheram, is fuming at the federation’s handling of supporters.

Rotheram attended the final in Paris, where he had his phone stolen. The Liverpool Mayor gave his perspective of the evening.

Speaking to BBC News, Rotheram stated he was “outraged by the treatment of Liverpool fans at the hands of French Police”.

He went on to say: “While fans travelled to the ground hoping for the night of their lives, it appears that the Gendarmerie went looking for conflict.”

Then, the Liverpool Mayor turned his attention to UEFA President Aleksander Ceferin. He gave the UEFA chief some damning criticism.

“Before the kick-off was even delayed, I went around begging everybody to do something, but UEFA were reluctant to listen,” said Rotheram, quotes from The Times.

‘He [Ceferin] was not interested in what was happening outside. In fact, quite the opposite; his arrogance astounded me.

“He was saying the authorities have killed themselves to get that game on. I appealed to him and said, ‘Don’t kill the fans outside’.

“It didn’t even fall on deaf ears. I said, ‘You need to do something’. They said I was being disrespectful because I said it again. Ceferin said to me, ‘This conversation is over’.”

The terrible scenes certainly ruined the experience of the match for supporters, on what should have been a memorable occasion. Sadly, the fallout from the Champions League final rumbles on. Because of the chaos, Liverpool released a feedback form so fans can share their experience of the game.