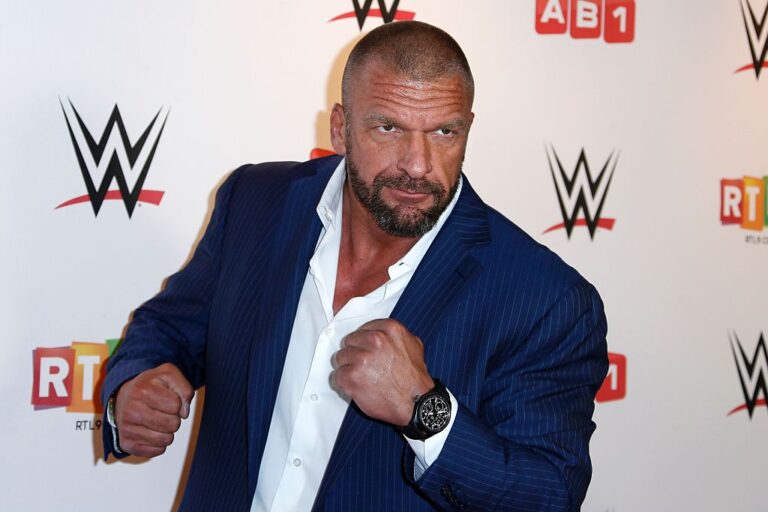 Logan Paul has admitted that Triple H gave him a vital piece of advice ahead of his incredible performance at Wrestlemania 38.

‘The Maverick’ arrived at the AT and T Stadium with a massive point to prove. After losing to KSI in a boxing match, fans questioned his athleticism. But he put any doubts about his physical abilities to bed through his unbelievable performance.

The controversial YouTuber teamed up with The Miz to take on Rey Mysterio and Dominik Mysterio. And to the surprise of the thousands of fans in attendance and the millions watching around the world, Paul proved that he possesses serious talent.

He sensationally executed the three amigos – a move made famous by Mysterio’s friend Eddie Guerrero – before showboating to the crowd and landing an excellent frog splash to finish the younger of his two opponents off.

His display, which resulted in critical acclaim from experts around the globe, sparkled with showmanship. But without some advice from one of the greatest of all time, he may not have captivated the audience to the extent he did.

You don’t become a 14-time world champion without knowing a thing or two about the business. ‘The Game’ is undeniably one of the best performers in WWE history. So if you have the opportunity to soak up any of his words of wisdom, you best take it.

On a recent edition of his podcast, ‘Impaulsive’, Paul shared what the wrestling icon said to him prior to walking to the ring.

He revealed: “Literally, right before I went on, Triple H came up to me. He goes, ‘just so you know, it’s not always about the physicality. The people want to see your charisma. They want to see you, your personality.’ I went, ‘okay, cool.’ So I took that. I actually took that and was thinking about what he said during some of the displays. And tried to just come through the screen so people could feel my emotion.”

It’s clear that the 27-year-old absorbed every word of what Triple H had to tell him. His terrific showing has likely banked him a lucrative future in the sport. After his victory, The Miz turned on him and left him splattered on the canvas via a brutal ‘skull-crushing finale’. This betrayal is likely leading to his next storyline.

Before signing his deal with the WWE, the social media icon made sure to have an interesting clause put into his contract, which could see him become a babyface. This might be an uphill battle for Vince McMahon. But he’s pulled off the impossible before, so who’s to say he can’t do it again.

Read: Logan Paul had a special contract put into his WWE contract.