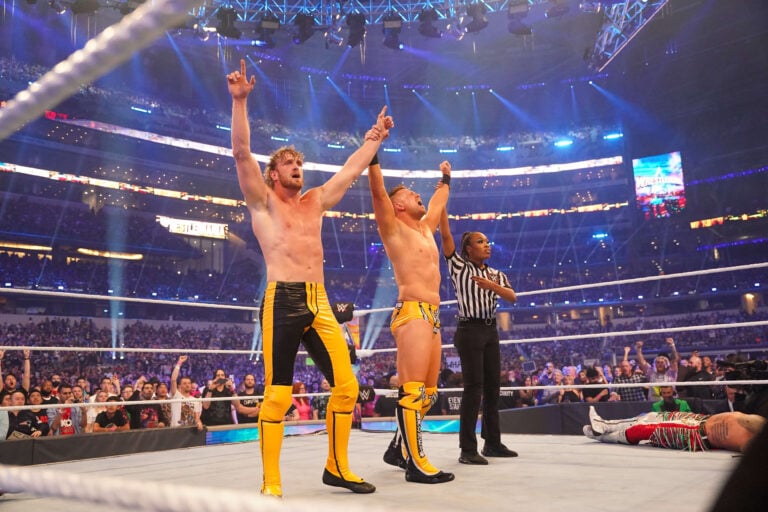 Throughout his career as a notorious YouTuber, Logan Paul has become one of the most controversial celebrities in America. But interestingly, WWE will try to change public opinion and portray him as a babyface.

At Wrestlemania 38, ‘The Maverick’ teamed up with The Miz to take on Rey Mysterio and his son Dominik Mysterio. The WWE Universe didn’t know what to expect from the social media personality. The former high school wrestler clearly possessed athletic ability, and his timing on the mic exceeded the average novice. But his performance on the grandest stage of them all shocked everyone.

He flawlessly executed the three amigos – a move, of course, made famous by Mysterio’s friend Eddie Guerrero – before showboating to the crowd and landing an excellent frog splash to finish the younger of his two opponents off.

His terrific showing left fans in awe. He produced a performance more fitting for a seasoned pro than a debutant. There’s no denying that Paul possesses a genuine talent for this sport, regardless of whether fans like it or not. Therefore, it’s likely that the WWE Universe will see a lot more of the 27-year-old.

What next for Logan Paul in the WWE?

After their hands were raised, The Miz shockingly attacked his teammate and left him sprawled on the canvas via a skull-crushing finale. The staggering betrayal is clearly leading to a future storyline.

On April 5, Dave Meltzer noted on Wrestling Observer Radio that The WWE had made an intriguing deal with Paul before the start of the match.

Read: WWE Raw crowd got treated to a Cody Rhodes dark match after it went off-air.

He said: “Oh, by the way, I didn’t know this, but it makes perfect sense. So you know why they did the Logan Paul and Miz thing at the end that we couldn’t understand? Because when they made the deal with Logan Paul to do this angle part of the deal, they said when you’re done with this angle, you’re gonna be a babyface. That was negotiated into the deal. I guess that’s why he was a babyface the first time too.”

Like most celebrities coming into the business, Paul wants the cheers instead of the boos. However, he’s facing one massive problem—the crowd didn’t sympathise with him. When The Miz laid him out with a brutal finisher, the WWE Universe screamed in delight.

But then again, Vince McMahon has a history of switching the narrative. For example, it took him years to get the crowd to warm to Roman Reigns. But realistically, this might be an even bigger hill to climb.

And since these reports emerged, Paul has announced that he has officially signed with WWE. Perhaps this special clause hints at what is next in WWE for Logan Paul.