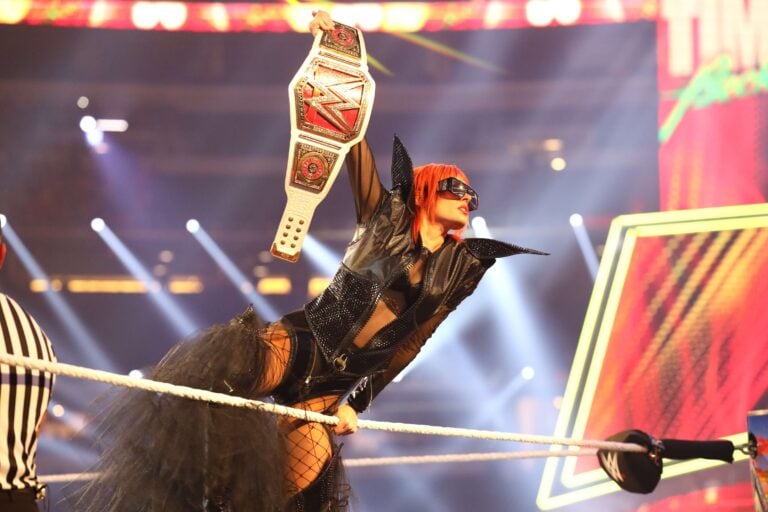 This old school image of Becky Lynch, Kevin Owens, and Sami Zayn highlights how far all three have come throughout their careers.

They all played a massive part in Wrestlemania 38, which delivered a spectacular array of match-ups for the WWE Universe to consume. The event perfectly blended talent old and new to provide an entertaining viewing experience for fans of all ages.

Becky Lynch, Kevin Owens and Sami Zayn all had excellent matches at Wrestlemania 38

The company utilised the trio of NXT graduates to significant effect. ‘The Man’ is one of the best competitors in women’s history. Her powerful performances and charisma on the mic have resonated with fans to an incredible level.

On April 2, sporting an eye-catching new look, she produced an entertaining contest against Bianca Belair before ultimately losing the match. Later in the evening, Kevin Owens headlined the event in a battle for the ages against ‘Stone Cold’ Steve Austin. The Canadian goaded the Hall of Famer into a ‘No Holds Barred Match,’ which captivated the 77,899 spectators in attendance.

They traded blows and finishers and even ended up scrapping in the stands. Eventually, ‘The Texas Rattlesnake’ hit his rival with an all-mighty ‘Stone Cold Stunner’ to secure a memorable victory.

On the second night of action, Zayn took on an opponent with limited experience in the wrestling ring but a lifetime of experience in doling out punishment. With the help of his good friend ‘Wee Man’ Jackass star, Johnny Knoxville pinned Sami Zayn in an enthralling hardcore battle.

Although all three superstars lost their contests, they helped create a historic occasion that fans will never forget. It’s amazing to think about how far they’ve come since they were starry-eyed youngsters with no idea of the fantastic future ahead of them.

Read: WWE Raw crowd got treated to a Cody Rhodes dark match after it went off the air.

Since their tremendous matches at Mania, a photo has emerged of the three wrestlers in the early stages of their careers. The image shows them fresh-faced and green in the business with a heartwarming obliviousness to the journey ahead.

They all possessed talent in abundance but weren’t ready to show the world. They were inexperienced yet confident of going on to achieve such great things. And they certainly did. They’ve exceeded expectations with seven world titles between them, and there’s so much more still to come.