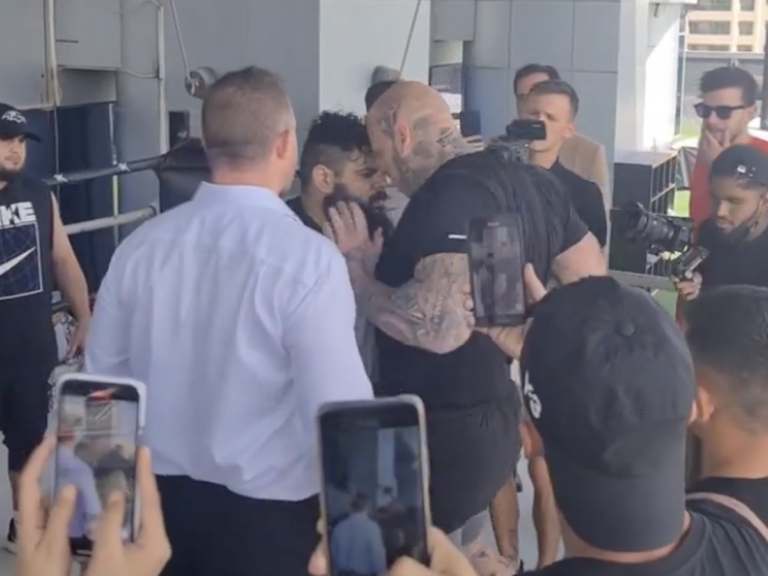 The much-anticipated boxing match between Martyn Ford and The Iranian Hulk is off. Ford broke the news to his Instagram followers yesterday, leaving more than three million fans disappointed. Many more had their curiosity piqued by the contest.

The booking was eye-catching. Ford, a towering bodybuilder whose acting resume features multiple monstrous roles, was pitted against an opponent with a much stranger profile. Better known by his Hulk moniker, Sajad Gharib built up a following through his social media activity. He regularly posted dramatic pictures – framed in front of the ruins of a building or staring into the distance on a beach – of his physique that compelled the public despite heavy-handed photoshopping.

It all seemed a bit silly. Yet the activity earned Gharib a big payday in the form of a showdown with Ford. If it’s stupid and it works, it isn’t stupid.

Except, in order to collect his bag, Gharib first had to cash cheques he had written with his Adobe subscription. He had to actually fight a renowned genetic phenomenon who called himself ‘the world’s scariest man.’ Cue a widely-mocked face-off that featured Gharib flying across the room after a Ford push. The Hulk tried to take Ford to the ground with a surprise takedown in retaliation. But he failed.

Read: The face-off between Martyn Ford and The Iranian Hulk has fans worried for one fighter.

If anything, this mismatch made the public more intrigued by their impending fight. The pair went back and forth in the media. Ford promised that he would knock Gharib out in record time. Gharib broke down in tears on television, talking about the pressure he was under and how his family treated him differently.

The stage was set for a bizarre fight at The O2 in London on April 30th, courtesy of Boxstar. However, the erratic preparations for the event left the possibility open for plans to change. A previous date for the event (April 2nd) had to be scrapped due to injuries on the fight card. Now, it seems that something similar has occurred.

Although Boxster have yet to comment on the cancellation – thus making it somewhat unofficial – both Ford and Gharib have claimed the bout is off. In addition to this public message, they each suggested that the other was to blame.

What Ford said about the cancellation

Speaking in an Instagram post on Monday, Ford told fans that the fight was off and expressed his frustration at the development.

Speaking to the camera, he said: “This is a statement I didn’t want to have to release, but unfortunately, my fight is going to be postponed. The event is still on; it’s just my fight. The event will still go ahead, and there are some great people and fights on.

“Unfortunately, mine won’t be one of them for reasons out of my control. It doesn’t take a genius to figure them all out. I don’t want to go down the route of talking about it; too much time and energy has been wasted.

Ford’s ‘genius’ comment could be interpreted as a suggestion that Hulk pulled out because he was frightened of his fate. Ford had repeatedly said that Gharib knew he was in for a tough night, that he was in over his head.

What Iranian Hulk said about the cancellation

Gharib also said his piece on social media. He told a different story to Ford. And instead of merely implying that the British combatant was to blame, he outright said it. We’ve edited the comment below to make it easier to read, but a screenshot of the original statement can be found underneath that.

Written in the caption of the post, Gharib communicated: “Today, I heard Ford don’t want [a] fight, not me, not any other fighters. I never cancelled any fight, but he don’t want [to] see me again! It’s against the contract, and my legal team started.

“Actually, pretty boy can’t never fight, who just hide and run away. He must have a permission from women first. I can’t believe [an] opponent like him. It’s shameful this victory isn’t [an] honor for me. It’s a century joke, not [a] century fight.”

The Boxstar event is still on

Ford said to his Instagram followers that the event is still happening even if the initial main event match between him and Gharib is off.

If the cancellation becomes official, it appears as though former Manchester United defender Patrice Evra will contest the main event with YouTuber Adam Saleh.