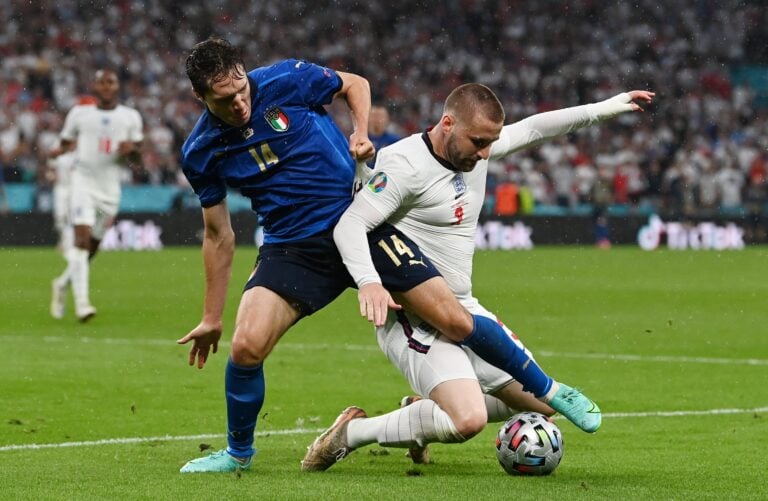 Manchester United and England defender Luke Shaw played through the latter stages of Euro 2020 with broken ribs, it has been revealed.

The Telegraph report that the left-back suffered the injury during the round-of-16 clash with Germany, which England won 2-0.

Shaw started all of England’s knockout games following the injury and played a key role in his side’s progression to the final.

Against Ukraine, he provided assists for goals scored by Harry Kane and Harry Maguire in the 4-0 win.

He played the full 120 minutes in the 2-1 victory over Denmark in the semi-final, before again featuring from the start for the final against Italy.

Shaw opened the scoring inside just two minutes to send parts of Wembley into raptures and stayed on the pitch for the entire 120 minutes.

However, despite the 26-year-old’s heroics throughout the tournament, the same report adds that his injury situation presents difficulties where Manchester United are concerned.

Shaw is currently on holiday after Euro 2020 concluded, so he has not yet been sent for scans to determine the extent of the injury.

Marcus Rashford could also miss the start of the season through injury, whilst Paul Pogba and Bruno Fernandes will only return to Carrington next week after featuring at Euro 2020.

The season proper for United gets underway on August 14, with Ole Gunnar Solskjaer’s side hosting Leeds United at Old Trafford.

In terms of transfer business, the club have already reached an agreement with Borussia Dortmund to sign England winger Jadon Sancho. The 21-year-old completed his medical last week.

Prominent journalist Fabrizio Romano tweeted yesterday that Varane and his agents “confirmed to Real Madrid his desire to try a new experience in the Premier League” – and that he “wants Man United”.