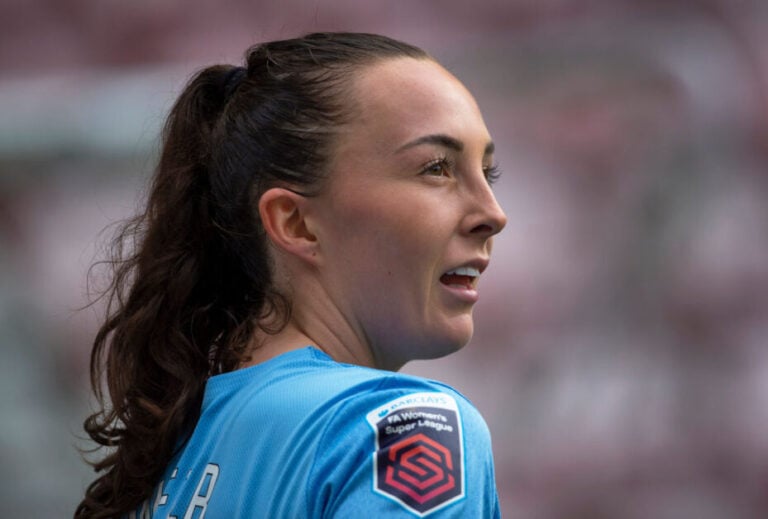 Caroline Weir scored an absolute beauty to give City the bragging rights in the Manchester derby.

The Scot’s side began the game in seventh place and five points behind their biggest rivals. After failing to beat their fierce adversaries on two occasions in this campaign, the odds were stacked against them. But ‘The Cityzens’ wanted to prove a point.

They dominated the United midfield with ease, securing a whopping 69% possession. But despite their 18 shots compared to their opposition’s three, they were still incapable of finding that all-important goal until Weir produced an awe-inspiring moment of magic.

The 26-year-old dribbled forward before unleashing an almighty chip from outside the box. Her beauty of a shot flew past a helpless Mary Earps to send The Academy Stadium into raptures. The tremendous goal secured her side the victory and saw them rise to fifth place in the table and just two points away from their fellow Manchester club.

Caroline Weir has been playing a blinder

The three-time FA Cup winner is an instrumental part of the Manchester City squad. The versatile player is renowned for bossing the midfield, but she’s just as willing to play up top and challenge the goalkeeper when needed.

The former Olympian has scored three goals and bagged one assist in her eleven appearances this campaign. Weir’s presence in the side will become more critical as the season rolls on. Having won four trophies with the club, it’s evident that the Scottish international knows how to get the job done.

And with her spellbinding chip considered, her team has all the momentum to try and overtake their rivals. However, what might come as a surprise is that this finish was almost a carbon copy of one she hit last year.

Manchester United must despise Caroline Weir. The supremely skilled playmaker has emerged as a real thorn in their side over the last couple of seasons. In February 2021, the Red Devils found themselves 2-0 down with less than ten minutes to go in a super league game.

And if losing to their neighbours wasn’t already bad enough, Weir beat her defender to strike a gorgeous chip into the top corner. The unbelievable finish earned the player a nomination for the FIFA Puskas Award.

The goal they conceded today was nearly identical.