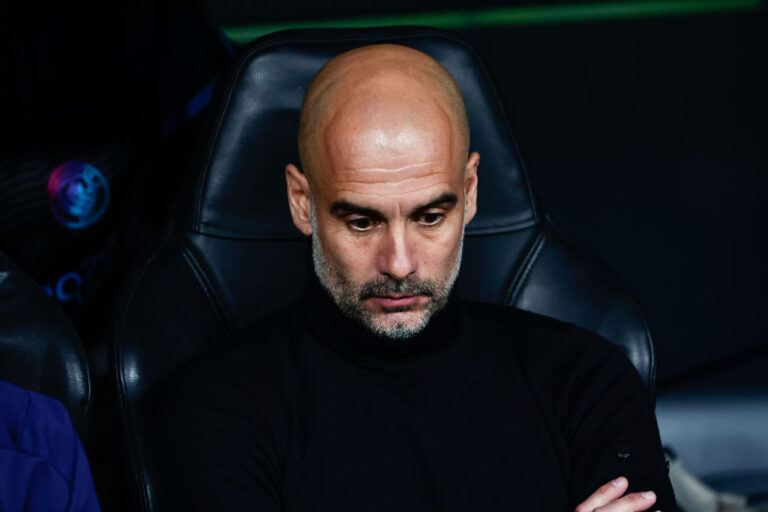 Pep Guardiola and Manchester City bowed out of the Champions League on Wednesday after falling to a remarkable Real Madrid comeback at the Bernabeu.

For most of the two-legged semi-final tie, the Citizens were mainly in control. They took the lead inside just two minutes at the Etihad Stadium.

Although they were involved in a barnstormer, City came out on the right end of the scoreline. Kevin De Bruyne, Gabriel Jesus, Phil Foden and Bernardo Silva all got on the scoresheet as the Premier League champions won 4-3.

The result meant that, in the return leg in Spain, Guardiola’s side needed to avoid defeat.

City did their job perfectly for most of the night at the Bernabeu. Real Madrid were left frustrated and failed to register a shot on target in the first half.

Guardiola was forced into a change when Kyle Walker suffered injury, and Kevin De Bruyne was having a quiet night. But City extended their advantage soon after. Riyad Mahrez smashed the ball into the net to give his side a 2-0 lead on aggregate.

City fans then began dreaming of a Paris trip, and an all-English final against Liverpool. But those dreams started to fall apart as stoppage time approached.

Firstly, Rodrygo managed to get to a low cross ahead of Ederson and poke the ball home. The noise inside the Bernabeu was deafening.

Then, just a minute later, the Brazilian struck again. He headed the ball into the corner of the net. Although City were still in the game from a scoreline point of view, Real’s equaliser put them in firm control.

Just five minutes into extra time, Karim Benzema decided the tie from the penalty spot after a foul by Ruben Dias. Guardiola’s worst fears were realised. City were out.

Pep Guardiola built his footballing reputation on his Barcelona teams, which he coached between 2008 and 2012.

At the time, the Spaniard established himself as arguably the best coach globally. Barca won the Champions League in 2009 and 2011, beating Manchester United in the final on both occasions.

After leaving Les Cules in 2012, Guardiola moved to Bayern Munich, where a third European title evaded him.

He then went on to join Manchester City in 2016. Despite numerous near misses, including last season’s final defeat to Chelsea, City have still not won the Champions League under Guardiola’s management.

Pep Guardiola has equalled an unwanted Jose Mourinho record with Wednesday’s Champions League exit. The Spaniard has now suffered six eliminations from the competition at the semi-final stage.

However, what may be more worrying for Guardiola is how his City team fell apart against Real Madrid. From a position of relative control, the Premier League champions could not handle the pressure exerted by the rampant hosts.

As per The Independent‘s Miguel Delaney, this collapse continues a concerning trend for Guardiola.

In eight of his Champions League eliminations across spells at Barcelona, Bayern and City, the Spaniard has seen his side concede two or more goals inside 20-minute spells.

The run is as follows:

Of course, those statistics are countered by the fact that Guardiola has two Champions League titles. Only Carlo Ancelotti, Bob Paisley and Zinedine Zidane have won more.

The Spaniard has also won 92 of his 147 Champions League matches. So while the trend is, naturally, cause for concern, Guardiola has still achieved what very few managers can in Europe.